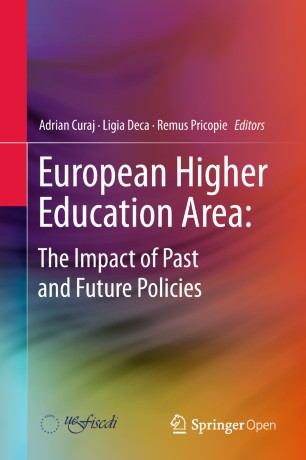 European Higher Education Area: The Impact of Past and Future Policies

Higher education has thrived in Europe for the last three decades supported by the powerful policy narratives of the European construction and knowledge society. The two together called for better-integrated societies with higher economic competitiveness, superior employment, and social cohesion. Extraordinary developments in higher education during this time have also been made possible by what looked like a triumphal march of democracy.

This volume sketches a vivid picture of the state of higher education in Europe almost 30 years after the fall of the Berlin Wall. The emphasis is on the role of the Bologna Process, which is soon to turn 20 years old (a respectable age for any reform process). The authors document long-term transformations and recent cracks in the established higher education pathways and the broader policy narratives that supported them for the last 20-30 years.

New developments begin to affect the course of higher education. They come, once again, from outside rather than from within higher education. In some places in Europe, instead of democratic progress, we now witness authoritarianism, populism, or what is called with cynical self-flattery “illiberal democracy”; instead of Europe - Brexit; instead of policies for economic advancement and shared benefits, we witness attempts to institutionalize corruption at state level; an unprecedented mass movement of people raises unprecedented challenges on the continent. These are not tendencies emerging everywhere in Europe and not to the same degree every time. And yet, they contribute to define a shift, a new political atmosphere, with a larger spectrum of political regimes but with democratic recession.

Are we witnessing the advent of a new era? If so, that raises questions regarding the future of higher education, some of which are addressed in this volume. How will this new historical situation influence higher education? What can be done in higher education, building on what has been already achieved in these past years, including the Bologna Process itself, to benefit citizens, institutions, countries, and Europe as a whole?

Adrian Curaj is a former minister of education, science and innovation in Romania.

He is the head of the UNESCO Chair on Science and Innovation Policies at the National University of Political Sciences and Public Administration and professor at the Politehnica University of Bucharest.

Adrian Curaj has been working as a consultant with World Bank, UNESCO, UNIDO, ETF and EC for studies in Tertiary Education, Science and Innovation, and Foresight. He has been actively involved as project leader, country or group leader and expert in many research projects (including FP7, H 2020, SEE & INTERREG), and published papers and books, most of them in foresight, higher education as well as science and innovation policies. He has been the initiator and co-chair of the Bologna Process Researchers Conferences (2011, 2014, 2017).

Adrian Curaj was member of the Board of Directors of the U.S. Fulbright Commission in Romania and the Romanian representative at the Bologna Follow-Up Group.  Also, professor Curaj is a fellow to the World Academy of Art & Science (WAAS).

Ligia Deca is State Adviser at the Romanian Presidential Administration with responsibilities in the field of education and research, and coordinator of the “Educated Romania” Project. She holds a doctorate in Political Science at the University of Luxembourg and has authored several papers and studies in the field of educational policies. She was the Head of the Bologna Process Secretariat (2010-2012), the international body responsible with the implementation of the Bologna Process within the EHEA member states and the preparation of the Ministerial Conference (that was organized in Bucharest, in April 2012). She has also coordinated the International Conference „Future of Higher Education – Bologna Process Researchers Conference” in 2011 and 2014. In the period of 2008-2010 Ligia Deca was the Chairperson of the European Students’ Union, thus representing for two consecutive mandates the interests of 11 million students from 37 states. Previously, she coordinated the Coalition of Clean Universities (a project targeting to promote good governance within the Romanian HEIs).

Prof. Remus Pricopie, PhD, is the rector of the National University of Political Studies and Public Administration (SNSPA) and former Romanian Minister of National Education. His activity within the Romanian Ministry of National Education began in 1996, and includes positions such as Spokesperson, Secretary General, and Deputy Minister – (Secretary of State) for Higher Education, International Relations and Teacher Training. Dr. Pricopie is also professor of public relations and public communication at the National University of Political Science and Public Administration in Bucharest (SNSPA). He has been elected rector of the SNSPA in March 2012, a position he occupied until he was appointed minister of education.

Professor Pricopie has a PhD in Political Science at the SNSPA and he is a Millennium Fulbright alumnus. His educational background includes a rich international experience especially in the United States of America and the European Union. Dr. Remus Pricopie has been Chair of the Task Force on Fostering and Building Human Capital (FBHC) of the Regional Cooperation Council (RCC)and President of the Board of Directors of the Romanian-US Fulbright Commission, to name just a few of the significant activities of representation he carried out during his professional career.

The activity of Dr. Remus Pricopie encompasses trans-disciplinary research in the areas of higher education management, internationalization of higher education, public communication, public participation and collaborative public management. As a result of his research, professor Pricopie has published several books, book chapters and over 40 scientific articles in peer-reviewed journals, in the areas of interest.