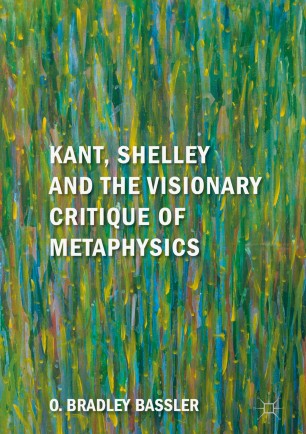 Kant, Shelley and the Visionary Critique of Metaphysics

This book addresses the philosophy of Kant and the poetry of Shelley as historical starting points for a new way of thinking in the modern age. Fusing together critical philosophy and visionary poetry, Bassler develops the notion of visionary critique, or paraphysics, as a model for future philosophical endeavor. This philosophical practice is rooted in the concept of the indefinite power associated with the sublime in both Kant and Shelley’s work, to which the notion of the parafinite or indefinitely large is extended in this book.

O. Bradley Bassler is Associate Professor of Philosophy at the University of Georgia Athens, USA.  He is the author of The Pace of Modernity: Reading with Blumenberg (2012), The Long Shadow of the Parafinite: Three Scenes from the Prehistory of a Concept (2015), and Diagnosing Contemporary Philosophy with the Matrix Movies (2017).

“It is a fascinating and insightful argument that literature might help critical philosophy out of its current impasse by showing it its own historical conditions of possibility: allowing it to reflect upon its own modes of self-representation, as they have been constructed by the genealogies to which it is indebted.” (Merrilees Roberts, The BARS Review, Issue 52, 2018)
Buy options