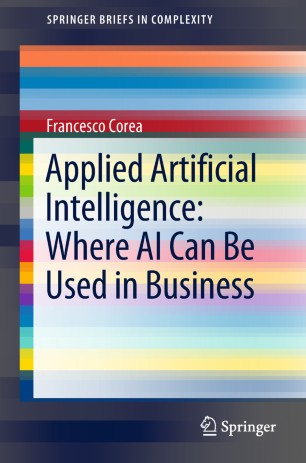 Applied Artificial Intelligence: Where AI Can Be Used In Business

Part of the SpringerBriefs in Complexity book series (BRIEFSCOMPLEXITY)

This book deals with artificial intelligence (AI) and its several applications. It is not an organic text that should be read from the first page onwards, but rather a collection of articles that can be read at will (or at need). The idea of this work is indeed to provide some food for thoughts on how AI is impacting few verticals (insurance and financial services), affecting horizontal and technical applications (speech recognition and blockchain), and changing organizational structures (introducing new figures or dealing with ethical issues).

The structure of the chapter is very similar, so I hope the reader won’t find difficulties in establishing comparisons or understanding the differences between specific problems AI is being used for. The first chapter of the book is indeed showing the potential and the achievements of new AI techniques in the speech recognition domain, touching upon the topics of bots and conversational interfaces. The second and thirds chapter tackle instead verticals that are historically data-intensive but not data-driven, i.e., the financial sector and the insurance one. The following part of the book is the more technical one (and probably the most innovative), because looks at AI and its intersection with another exponential technology, namely the blockchain. Finally, the last chapters are instead more operative, because they concern new figures to be hired regardless of the organization or the sector, and ethical and moral issues related to the creation and implementation of new type of algorithms.