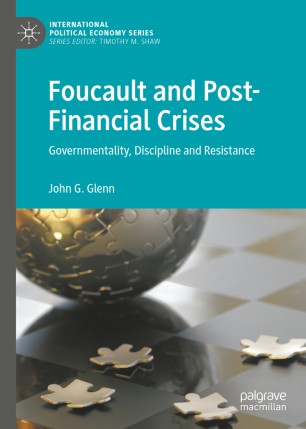 ‘A fascinating narrative of the remarkable failure by governments and international agencies, in the aftermath of the global financial crisis, to tame global finance. Glenn’s incisive analysis explains why another crisis is even more likely despite attempts to make the system more resilient.’
—Tony McGrew, La Trobe University, Australia

‘John Glenn provides an insightful new analysis of the recent financial crises, adopting a Foucauldian perspective to better understand the ways in which the security of populations has been endangered by the failure to implement fundamental reforms, and to advocate for resistance rather than resilience. This book is a major contribution to research and understanding on global economic systems and governance.’
—Jane Freedman, Université Paris, France

This title explains the causes of the financial crisis and the economic reforms that were created subsequently through a Foucauldian philosophical lens. The author sets out the approaches established by Foucault – namely governmentality, biopolitics and disciplinary mechanisms – explaining how these influenced the shift of production from a local to a global level, alongside a shift towards financialisation. Glenn applies Foucauldian principles to aid understanding of the self-corrective mechanisms applied to the financial system, and the interpellative processes that led to the emergence of a new mode of subjectification. Concurrently, this title examines the retreat of the state from the financial sphere. This shift, the author posits, did not mean the complete absence of governance; rather governance became more concerned with ensuring that financial behaviour was contained within certain limits.

John G. Glenn is Senior Lecturer of International Relations and International Political Economy at the University of Southampton, UK.

John G. Glenn is Senior Lecturer of International Relations and International Political Economy at the University of Southampton, UK.