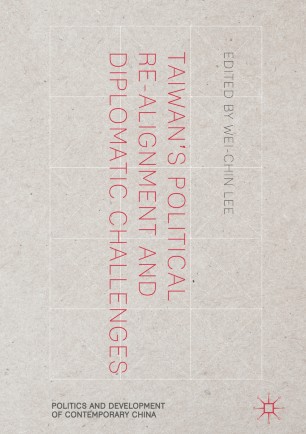 This edited volume investigates and evaluates the context, causes, and consequences of various essential issues in Taiwanese domestic politics and external relations before and after the regime change in 2016.  It offers theoretical interpretation and temporal delineation of recent electoral shifts, party realignment, identity reformulation, and subsequent foreign policy adaptation in the 2010s. Contributors address these issues in three sections—“Democracy and New Political Landscape,” “The China Factor and Cross-Strait Dilemma,” and “Taiwan’s International Way-out”—to advance conclusions about Taiwan’s political transformation from both comparative and international perspectives.
Wei-chin Lee is Professor of Politics and International Affairs at Wake Forest University, USA.

“This compiled volume on Taiwan Politics is refreshing and thought-provoking. It astutely explores a new trajectory triggered by the critical 2016 elections on the island republic.  Its laser beam focuses on de-alignment in Taiwan’s fairly institutionalized party system and realignment in its external relations.  All crucial puzzles are included in the study, such as the advent of the millennial voters, the meteoric rise of the New Power Party, and Taiwan’s new southbound policy.  The volume is brimmed with first-rate scholarship.  Its contributors consistently provide insightful and unequivocal analyses.  This volume has really set a high bar for the study of democratic Taiwan.” (T.J. Cheng, Class of 1935 Professor of Government, College of William and Mary, USA)

“This new book is a welcome addition to the literature on Taiwan’s politics. The editor Lee Wei-chin has done a remarkable job gathering together many of the leading specialists on Taiwan’s domestic and international politics. I particularly enjoyed some of the chapters that addressed topics that are often neglected in studies of Taiwan’s politics such as on alternative parties, Japan-Taiwan relations, the comparison with Hong Kong and relations with South East Asia. As someone that teaches courses on undergraduate and postgraduate Taiwan’s politics, I look forward to adding many of these chapters to the reading lists for the next academic year!” (Dafydd Fell, Director Centre of Taiwan Studies, University of London, United Kingdom)

“The 2016 national election, which the opposition Democratic Progressive Party (DPP) won handily (gaining a majority in the legislature for the first time), became a turning point in terms of Taiwan’s domestic politics and its diplomacy. Professor Lee Wei-chin sets the stage in this book for a stable of Taiwan specialist scholars to look in-depth at the problems Taiwan faced post-election. They do yeoman’s jobs in elucidating Taiwan’s current dilemmas.” (John F. Copper, the Stanley J. Buckman professor (emeritus) of International Studies at Rhodes College, USA)