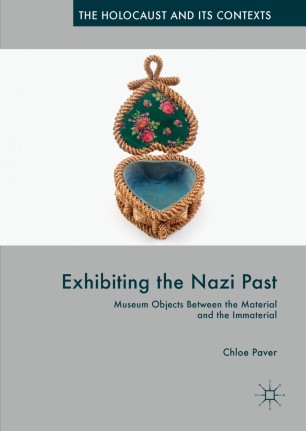 Exhibiting the Nazi Past

Museum Objects Between the Material and the Immaterial

This book is the first full-length study of the museum object as a memory medium in history exhibitions about the Nazi era, the Second World War, and the Holocaust. Over recent decades, German and Austrian exhibition-makers have engaged in significant programmes of object collection, often in collaboration with witnesses and descendants. At the same time, exhibition-makers have come to recognise the degree to which the National Socialist era was experienced materially, through the loss, acquisition, imposition, destruction, and re-purposing of objects. In the decades after 1945, encounters with material culture from the Nazi past continued, both within the family and in the public sphere. In analysing how these material engagements are explored in the museum, the book not only illuminates a key aspect of German and Austrian cultural memory but contributes to wider debates about relationships between the human and object worlds.

Chloe Paver is Associate Professor of German at the University of Exeter, UK. She published widely on German literature and film before turning to the study of history exhibitions. She is the author of Narrative and Fantasy in the Post-War German Novel (1999) and Refractions of the Third Reich in German and Austrian Fiction and Film (2007).