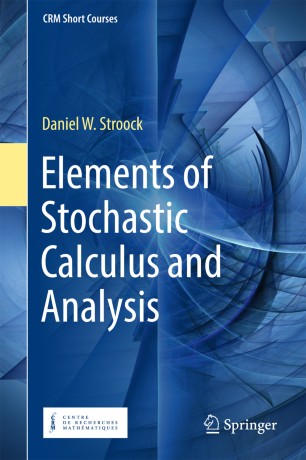 Elements of Stochastic Calculus and Analysis

This book gives a somewhat unconventional introduction to  stochastic analysis.  Although most of the material covered
here has appeared in other places, this book attempts to explain the core ideas on which that material is based.  As a consequence, the presentation is more an extended mathematical essay than a ``definition,
lemma, theorem'' text.  In addition, it includes several topics that are not usually treated elsewhere.  For example,
Wiener's theory of homogeneous chaos is discussed, Stratovich integration is given a novel development and applied to derive Wong and Zakai's approximation theorem, and examples are given of the application of
Malliavin's calculus to partial differential equations.  Each chapter concludes with several exercises, some of which are quite challenging.  The book is intended for use by advanced graduate students and research
mathematicians who may be familiar with many of the topics but want to broaden their understanding of them.

Daniel W. Stroock is Professor Emeritus of Mathematics at MIT. Professor Stroock's research interests focus on probability theory and stochastic processes.  Stroock (with S. Varadhan) was awarded the Leroy P. Steele Prize for seminal contributions to research in stochastic equations. In 2007, Stroock received an Honorary Fellowship at Swansea University, Wales, and in 2004 selected to be Foreign Member of the Polish Academy of Arts and Sciences. Professor Stroock is a Fellow of the American Academy of Arts and Sciences (1991), and a Member of the National Academy of Sciences (1995). Professor Stroock has made many contributions to pedagogical literature, among these include: An Introduction to Markov Processes" (GTM 230),  "Essentials of Integration Theory for Analysis" (GTM 262), "Multidimensional Diffusion Processes" (Classics in Mathematics).

“The book is suitable for post-doctorates, researchers, or as a text for a 3 rd -year graduate course.” (MAA Reviews, October 10, 2020)
“By writing this book the author has shown once again that he is one of the leading masters of modern probability theory. There are all the expectations to believe that the book will be met positively and will be useful and encouraging for both young mathematicians and professionals working in the areas of probability theory and its applications and analysis.” (Jordan M. Stoyanov, zbMATH 1428.60001, 2020)
“This is a high level book suitable for an advanced graduate level course, but can be useful for research mathematicians as well.” (Tamas Szabados, Mathematical Reviews, July, 2019)
Buy options