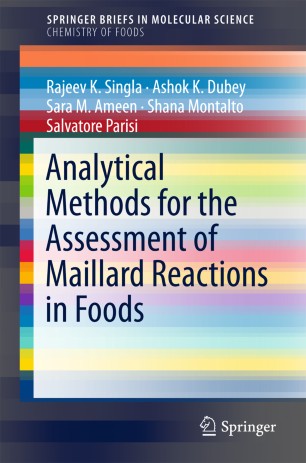 Analytical Methods for the Assessment of Maillard Reactions in Foods

This Brief provides an overview of different analytical methods and techniques for the qualitative and quantitative evaluation of Maillard Reactions and their reaction products in foods during processing and storage. Reliable methodology for the investigation of Maillard Reactions and their products are of utmost importance in food analysis: since Maillard Reactions can on the one hand be desirable and advantageous, influencing the colors, flavors and odors of food products, they can on the other hand also produce detrimental compounds afflicting the consumers’ health (e.g. furfurals, furosine, or acrylamide).
This Brief introduces different analytical methods, which can be used to investigate and characterize Maillard Reactions and their products in foods, including for example capillary electrophoresis, high performance liquid chromatography, gas chromatography with mass spectrometric detection, UV-VIS spectrophotometry, fluorescence, electronic nose, gravimetric systems, and many more. The chapters exemplify how the analytical techniques can be applied for assessing and evaluating different Maillard Reaction products in foods. Readers will find basic information, as well as practical hints and guidelines for application in their own laboratory.

Rajeev Kumar Singla is a senior scientific assistant at the Netaji Subhas Institute of Technology (NSIT), New Delhi, India, with a broad experience in secondary metabolites isolation, computational chemistry (docking, QSAR, ADME and Toxicological Predictions) and synthetic chemistry. Dr Singla is also Chief Editor of Indo Global Journal of Pharmaceutical Sciences and Associate Editor of Frontiers in Chemistry, and member of the Sigma-Aldrich Global Advisory Board, The Science Advisory Board, the Asian Council of Science Editors, and the Non-profit research community Ebola Research Initiative, along with a Honorary Faculty Membership at the Novel Global Community Educational Foundation (NGCEF), Australia.

Sara M. Ameen is a Quality Control Chemist at the Medical Research Laboratories, Helwan University, Faculty of Science, Cairo, Egypt, and her main duties include: modification and validation of analytical procedures, development of experimental protocols, and other quality control-related responsibilities in the field of analytical chemistry. She obtained her Bachelor's Degree, Double Major in Chemistry and Zoology in 2010, and subsequent Postgraduate Diploma in Analytical Chemistry and Premaster Studies in Inorganic and Analytical Chemistry (2011 and 2012, respectively) at Helwan University, working as an analytical chemist and documentation officer afterwards.

Salvatore Parisi, PhD, FSPCA PCQI, obtained his MSc from the University of Palermo, and PhD from the University of Messina, Italy. Between 1994 and 2010, Dr Parisi has been involved in different chemical activities working and travelling in different countries around the world, including the United Kingdom, Spain, France, Czech Republic, and United States of America. Dr. Parisi serves as series editor for the SpringerBriefs in Molecular Science: Chemistry of Foods; he is also an associate of AOAC International, USA, Southern California Section, serving in the AOAC Official Methods of AnalysisSM (OMA) Expert Review Panel (ERP) for Fertilizers,  the AOAC SPIFAN ERP for 2- and 3-MCPD & Glycidyl Esters, and eight different AOAC working groups. He also co-authored the “Stakeholders’ Guidance Document for Consumer Analytical Devices with a Focus on Gluten and Food Allergens”, recently published in the Journal of AOAC International. At present, he is actively working at the Associazione ‘Componiamo il Futuro’ (COIF), Palermo, Italy.