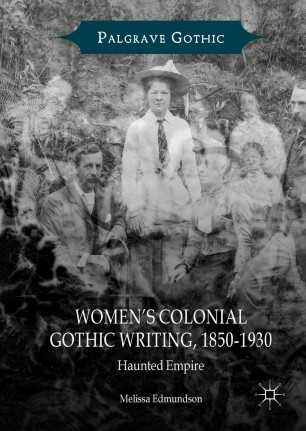 This book explores women writers’ involvement with the Gothic. The author sheds new light on  women’s experience, a viewpoint that remains largely absent from male-authored Colonial Gothic works. The book  investigates how  women writers appropriated the Gothic genre—and its emphasis on fear, isolation, troubled identity, racial otherness, and sexual deviancy—in order to take these anxieties into the farthest realms of the British Empire. The chapters show how Gothic themes told from a  woman’s perspective emerge in unique ways when set in the different colonial regions that comprise the scope of this book: Canada, the Caribbean, Africa, India, Australia, and New Zealand. Edmundson argues that women’s Colonial Gothic writing tends to be more critical of imperialism, and thereby more subversive, than that of their male counterparts. This book will be of interest to students and academics interested in women’s writing, the Gothic, and colonial studies.

Melissa Edmundson is Lecturer of English at Clemson University and specializes in 19th- and 20th- century British women writers, ghost stories, the Gothic, and Anglo-Indian popular fiction. She is the author of Women's Ghost Literature in Nineteenth-Century Britain (2013).

“Melissa Edmundson’s study is an impressive volume that will probably prove influential in the field of Gothic Studies. … This volume provides an excellent foundation upon which Edmundson or other scholars might build. ... Edmundson introduces us to several strangers in strange lands on whom future scholarship might focus. This is an important step in the reclamation of marginalized voices, both academically and politically commendable.” (Eleanor Dobson, Modern Language Review, Vol. 114 (3), July, 2019)“Edmundson’s book is a veritable treasure trove of undiscovered women’s postcolonial and Gothic work and fills an amazing gap in our understanding, which ranges round British and American, some colonial Gothic, nineteenth century work, early twentieth century and contemporary work. The scholarship and the focus are impeccable, using established and new critics’ work on gender, the Gothic and postcolonial writing to provide a new reading of a very under researched area.” (Gina Wisker, University of Brighton, UK)
Buy options