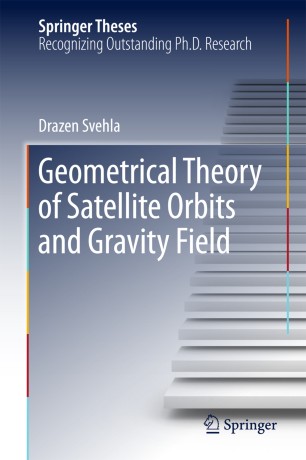 This book on space geodesy presents pioneering geometrical approaches in the modelling of satellite orbits and gravity field of the Earth, based on the gravity field missions CHAMP, GRACE and GOCE in the LEO orbit. Geometrical approach is also extended to precise positioning in space using multi-GNSS constellations and space geodesy techniques in the realization of the terrestrial and celestial reference frame of the Earth. This book addresses major new developments that were taking place in space geodesy in the last decade, namely the availability of GPS receivers onboard LEO satellites, the multitude of the new GNSS satellite navigation systems, the huge improvement in the accuracy of satellite clocks and the revolution in the determination of the Earth's gravity field with dedicated satellite missions.

Dr.-Ing. Drazen Svehla graduated from the University of Zagreb in Croatia with the highest grade average in the history of the faculty and received two Rector’s Prizes for his work. His Diploma thesis was about GPS and determination of the geoid surface with cm accuracy, with Prof. K. Čolić from the University of Zagreb and Prof. H. Moritz from TU Graz. He continued with his Ph.D. at TU München, where he worked with Prof. M. Rothacher on the precise orbit determination of satellites in the LEO orbit with GPS, covering all aspects of space geodesy, including determination of the reference frame of the Earth. During the same period, he also worked with Prof. R. Rummel on spherical harmonics and modelling of gravity field of the Earth. After Prof. M. Rothacher moved to ETH Zürich, Drazen continued working with him. This work resulted in his PhD thesis, which in turn led to this book, about 10 papers, 90 conference talks all over the world and 30 invited talks at various research institutions and universities. Drazen has also served as Chairman of the ESA Topical Team on Geodesy, he has organized one ESA conference and served as a convener at several international conferences. He is enthusiastic about novel ideas related to all aspects of space geodesy, aerospace and astrodynamics.