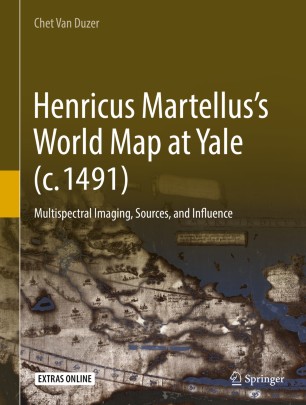 This book presents groundbreaking new research on a fifteenth-century world map by Henricus Martellus, c. 1491, now at Yale. The importance of the map had long been suspected, but it was essentially unstudiable because the texts on it had faded to illegibility. Multispectral imaging of the map, performed with NEH support in 2014, rendered its texts legible for the first time, leading to renewed study of the map by the author. This volume provides transcriptions, translations, and commentary on the Latin texts on the map, particularly their sources, as well as the place names in several regions. This leads to a demonstration of a very close relationship between the Martellus map and Martin Waldseemüller’s famous map of 1507. One of the most exciting discoveries on the map is in the hinterlands of southern Africa. The information there comes from African sources; the map is thus a unique and supremely important document regarding African cartography in the fifteenth century. This book is essential reading for digital humanitarians and historians of cartography.

Chet Van Duzer is a David Rumsey Research Fellow at the John Carter Brown Library and a board member of the Lazarus Project at the University of Rochester, which brings multispectral imaging to cultural institutions around the world. He has also held research fellowships at the Library of Congress, the Huntington Library, the Clements Library, and Princeton University Library. He has published extensively on medieval and Renaissance maps in journals such as Imago Mundi, Terrae Incognitae, Word & Image, and Viator. He is the author of Johann Schöner’s Globe of 1515: Transcription and Study, the first detailed analysis of one of the earliest surviving terrestrial globes that includes the New World; and (with John Hessler) Seeing the World Anew: The Radical Vision of Martin Waldseemüller’s 1507 & 1516 World Maps. His book Sea Monsters on Medieval and Renaissance Maps was published in 2013 by the British Library, and is now available in German and Russian editions, with a Chinese edition on the way. In 2014 the Library of Congress published a study of Christopher Columbus’s Book of Privileges which he co-authored with John Hessler and Daniel De Simone. His book The World for a King: Pierre Desceliers’ Map of 1550 was published at the end of 2015 by the British Library, and in 2016 Brill published a book he co-authored with Ilya Dines, Apocalyptic Cartography: Thematic Maps and the End of the World in a Fifteenth-Century Manuscript. His current NEH project is a study of the annotations in a heavily annotated copy of the 1525 edition of Ptolemy’s Geography.