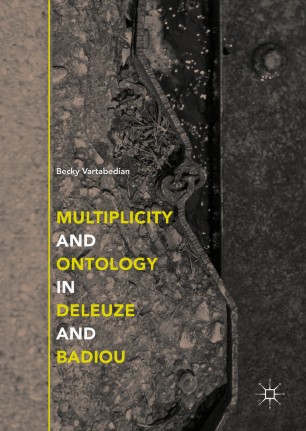 Multiplicity and Ontology in Deleuze and Badiou

This book approaches work by Gilles Deleuze and Alain Badiou through their shared commitment to multiplicity, a novel approach to addressing one of the oldest philosophical questions: is being one or many?

Becky Vartabedian examines major statements of multiplicity by Deleuze and Badiou to assess the structure of multiplicity as ontological ground or foundation, and the procedures these accounts prescribe for understanding one in relation to multiplicity.

Written in a clear, engaging style, Vartabedian introduces readers to Deleuze and Badiou’s key ontological commitments to the mathematical resources underpinning their accounts of multiplicity and one, and situates these as a conversation unfolding amid political and intellectual transformations.

“This book advances a substantially new interpretative position on one of the most interesting and important debates in contemporary ontology, that between Gilles Deleuze and Alain Badiou.  It is unique in the depth of its engagement with the underlying ontological issues in both philosophers, and specifically with the concept of multiplicity which, as is convincingly argued, offers common ground for a broader ontological project common to the legacy of the two. Additionally, it clearly explains the essential mathematical underpinnings of both philosophers' ontological positions, in a way that will be accessible also to those who do not have a primarily mathematical or formal background.  Well-written, solidly argued, and exegetically helpful, it will contribute significantly to the emerging literature on Badiou and Deleuze, and indeed to contemporary discussions in ontology in their own right.” (Paul M. Livingston, University of New Mexico, USA)

“The Deleuze/Badiou debate continues to be one of the most provocative and productive areas of inquiry in current Continental philosophy. The primary strengths of Vartabedian’s intervention into this field are its clarity and definiteness; a clear position is articulated here that is sure to move the debate forward. By refusing a top-down, overview style of engaging Deleuze/Badiou and opting instead for a bottom-up approach springing from the single, albeit contentious concept of multiplicity, the book presents a fresh contribution that will have to be reckoned with by future researchers. The mathematical sections of the argument are informal but often refreshingly intuitive without compromising the rigorous issues at stake. Vartabedian is well-versed in the relevant literature and is aware throughout of both the limits and constructive potential of her analysis.” (Rocco Gangle, Endicott College, USA)
Buy options