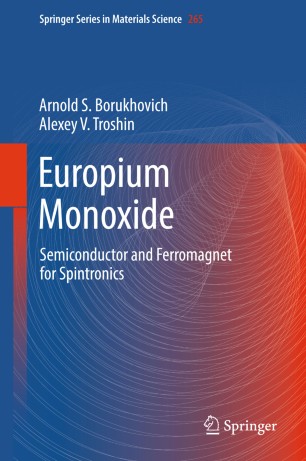 Semiconductor and Ferromagnet for Spintronics

This book presents the physical characteristics and possible device applications of europium monoxide as well as materials based on it. It reveals the suitability of this material for device applications in super- and semiconductor spin electronics. Ferromagnetic semiconductors like europium monoxide have contributed to a fascinating research field in condensed matter physics. In the book are presented the electronic and magnetic properties and thermal and resonance parameters of this material, its peculiarities in external fields as a function of non-stoichiometry, doping level, both in single-crystal and thin-film states. Particular attention is paid to the possibility to use this monoxide or its solid solutions (composites) unconventionally for creating spin electronics structures which work at room temperature conditions.

This book appeals to researchers, graduate students and professionals engaged in the development of semiconductor spin electronics and computer dev

ices, technologists and theoretical physicists. It is important for the calculation, development and creation of spin memory devices for a quantum computer.

Arnold S. Borukhovich obtained his doctorate in physics and mathematics in 1989. The second doctor degree in physics and mathematics he received in 1989 at the Institute of Ural Branch of Russian Academy of Sciences with a work “Thermodynamic peculiarities and phases transitions at the magnetic semiconductors based on 3d and 4f metals”. In 1997 he became professor at the Russian State Vocational Pedagogical University, Yekaterinburg.