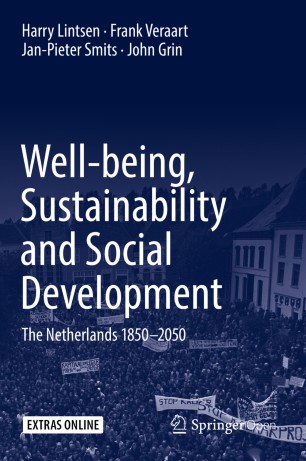 This open access book examines more than two centuries of societal development using novel historical and statistical approaches. It applies the well-being monitor developed by Statistics Netherlands that has been endorsed by a significant part of the international, statistical community.

It features The Netherlands as a case study, which is an especially interesting example; although it was one of the world’s richest countries around 1850, extreme poverty and inequality were significant problems of well-being at the time. Monitors of 1850, 1910, 1970 and 2015 depict the changes in three dimensions of well-being: the quality of life 'here and now', 'later' and 'elsewhere'. The analysis of two centuries shows the solutions to the extreme poverty problem and the appearance of new sustainability problems, especially in domestic and foreign ecological systems.

The study also reveals the importance of natural capital: soil, air, water and subsoil resources, showing their relation with the social structure of the ‘here and now´. Treatment and trade of natural resources also impacted on the quality of life ‘later’ and ‘elsewhere.’ Further, the book illustrates the role of natural capital by dividing the capital into three types of raw materials and concomitant material flows: bio-raw materials, mineral and fossil subsoil resources.

Prof. dr. Jan-Pieter Smits is part-time professor Qualification of Sustainability at Eindhoven University of Technology, a chair financed by Statistics Netherlands. He obtained his PhD degree in 1995 at the VU Amsterdam. He worked at Utrecht University and the University of Groningen, where he published in the field of historical national accounting, long term economic growth, and the effects of economic growth on well-being. He coordinated historical research in the Groningen Growth and Development Centre, and was a program coordinator in the N.W. Posthumus Institute, the post-graduate school of economic and social history. In 2007 Smits was appointed senior statistical researcher at Statistics Netherlands, where he became project leader of the Sustainability Monitor of the Netherlands and its successor the Monitor of Well-being. With Rutger Hoekstra he led the UNECE – Eurostat - OECD Taskforce for Measuring Sustainable Development. Smits has also represented Statistics Netherlands in the United Nations Inter-Agency Group for Measuring the Sustainable Development Goals.

Prof. Dr. John Grin is full professor of Policy Science, especially System Innovation at the University of Amsterdam. He graduated in physics (BSc, 1983; MSc, 1986), obtained his PhD (1990) at the VU University in Amsterdam on technology assessment and did post-doctoral research on these issues at Princeton University (1990-91) and VU University (1991-1992). He then joined the University of Amsterdam’s Department of Public Policy Studies (later part of the Department of Political Science).  Grin was co-founder and co-director (with Jan Rotmans & Johan Schot) of the Dutch Knowledge Network on System Innovations and transitions (2005-2010) and scientific director of the then Amsterdam School of Social science Research (2006-2010). Currently, he is co-director of the Programme Transnational Configurations, Conflicts and Governance at the Amsterdam Institute for Social Science Research. Theoretically, his research interests include policy analysis, policy design and the governance of transitions. Empirically, his work focuses on sustainable agriculture and food, health and care and increasingly also urban transformation. He has extensive experience in evaluating and monitoring projects and programmes for innovative policy design and governance in these areas.

“This work should be read as a groundbreaking model of applied history that addresses a target audience far beyond the scholarly community. Such target groups include stakeholders in the political realm, who long for sound expertise from the humanities on the seminal question, how to transition to a society that does justice to both well-being and sustainability in the broadest sense.” (Helmuth Trischler, Technology and Culture, Vol. 61 (3), 2020)