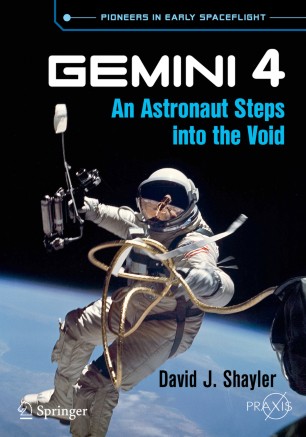 An Astronaut Steps into the Void

The flight of Gemini 4 in June 1965 was conducted barely four years after the first Americans flew in space. It was a bold step by NASA to accomplish the first American spacewalk and to extend the U.S. flight duration record to four days. This would be double the experience gained from the six Mercury missions combined.

This daring mission was the first to be directed from the new Mission Control at the Manned Spacecraft Center near Houston, Texas. It also revealed that:

Despite the risks, the gamble that astronauts Jim McDivitt and Ed White undertook paid off. Gemini 4 gave NASA the confidence to attempt an even longer flight the next time. That next mission would simulate the planned eight-day duration of an Apollo lunar voyage. Its story is recounted in the next title in this series: Gemini 5: Eight Days in Space or Bust.

Dave Shayler's interest in the U.S. Gemini program began during the late 1960s whilst reading about the earlier missions of Apollo astronauts as they prepared for the first lunar landings. The skills learned, which secured their seats on Apollo were achieved during ten Gemini missions flown between March 1965 and November 1966. From that early research he learnt that Gemini was an important stepping stone to Apollo and though shorts it was a critical program not only on the way to the moon but also in planning future programs. Even today, nearly 50 years after the final Gemini spacecraft flew the program holds a special place in the hearts of those who worked on the project.

Over the years this research continued and resulted in visits to the NASA JSC facilities and archives in Houston and the NARA records offices in Fort Worth, Texas where many of the official Gemini documents had been retired.  Dave had the good fortune to meet and interview astronauts and engineers who worked on the program and access retired documentation from that exciting era.

In 1976, as his interest in human spaceflight developed, he joined the British Interplanetary Society; in 1984 Dave was elected a Fellow and since 2013 has served as a member of the BIS Council. For the past few years he has served as Chair for the BIS Library Committee and as Coordinator and Co-Chair of the annual Soviet/Chinese Technical Forum. In addition in 1990 he became a co-founder and Chairman of the Midlands Spaceflight Society.

In order to focus research and writing activities he formed his own company, Astro Info Service, in October 1982. Together with his writing activities this has allowed Dave to travel to the United States and Russia to tour leading spaceflight facilities, interview astronauts, cosmonauts, managers and engineers and research official documentation on various aspects of human space history, hardware and operations, including the Gemini program. In addition he has completed an extensive programme of lectures, presentations and workshops across the UK to various educational, social and professional groups, and has supported the work of several fellow authors and researchers, with many of his efforts being referenced or suggested for further reading.

In 2001 this work resulted in Dave Shayler's fourth book under the Praxis/Springer series entitled GEMINI Steps to the Moon which presented an overview of the whole program.

“This well-researched volume by David Shayler, the author of numerous books about human spaceflight, will be a valuable addition to the bookshelves of anyone interested in the events that took place more than 50 years ago and culminated in humans walking on the Moon.” (Peter Bond, The Observatory, Vol. 139 (1272), October, 2019)
Buy options