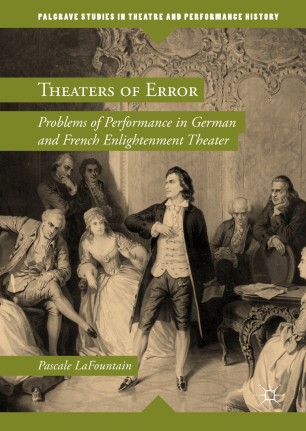 Problems of Performance in German and French Enlightenment Theater

This book offers provocative readings of canonical Enlightenment dramas that reflect and shape the period’s changing understanding of error. With striking interdisciplinary connections to theater treatises as well as works from the philosophical, legal, and medical discourses, it tracks the relocation of error from the moral to the physical realm, a movement that begins with Lessing and continues through the turn of the nineteenth century.
Featuring detailed analyses of Lessing’s Miß Sara Sampson, Diderot’s Le Fils naturel, Schiller’s Die Räuber, and Kleist’s Die Familie Schroffenstein alongside rich close readings of diverse primary sources, ranging from previously untranslated acting treatises by Sainte-Albine and Engel to texts from the German Archiv des Criminalrechts, this study introduces the reader to new Enlightenment sources and compellingly concludes that ultimately it is no longer evil, but rather bodily irregularities and mistakes in reading the body that become the driving principle of Enlightenment drama.