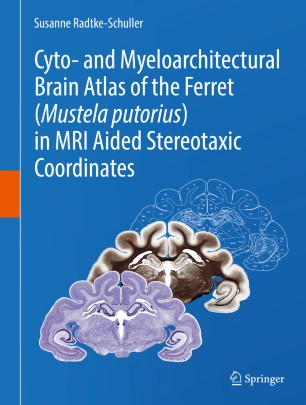 This stereotaxic atlas of the ferret brain provides detailed architectonic subdivisions of the cortical and subcortical areas in the ferret brain using high-quality histological material stained for cells and myelin together with in vivo magnetic resonance (MR) images of the same animal. The skull-related position of the ferret brain was established according to in vivo MRI and additional CT measurements of the skull. Functional denotations from published physiology and connectivity studies are mapped onto the atlas sections and onto the brain surface, together with the architectonic subdivisions. High-resolution MR images are provided at levels of the corresponding histology atlas plates with labels of the respective brain structures. The book is the first atlas of the ferret brain and the most detailed brain atlas of a carnivore available to date. It provides a common reference base to collect and compare data from any kind of research in the ferret brain.

Displays high-resolution MR images at intervals of 0.15 mm from another animal with labeled brain structures as plate 5 corresponding to the anterior-posterior level of each atlas plate.

Target audience of the book:

The book addresses researchers and students in neurosciences who are interested in brain anatomy in general (e.g., for translational purposes/comparative aspects), particularly those who study the ferret as important animal model of growing interest in neurosciences.

A leading neuroanatomist long affiliated with the University of Munich (LMU München), now with the University of North Carolina at Chapel Hill (UNC), Dr. Radtke-Schuller has developed a new approach to brain atlases. She recently received high praise from one of Germany’s leading neuroanatomists, Prof. Karl Zilles (Jülich), for her gerbil brain atlas, published as a supplement to the journal Brain Structure & Function.

She has worked in cooperation with well-known international scientists on the neuroanatomy and physiology of bats and tenrecs and, for more than a decade, on ferret neuroanatomy.