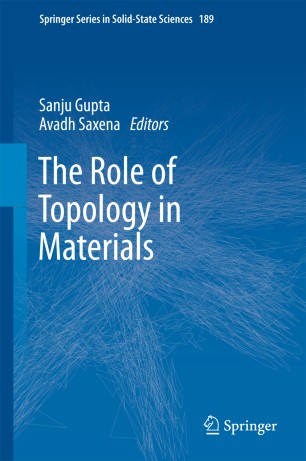 The Role of Topology in Materials

This book presents the most important advances in the class of topological materials and discusses the topological characterization, modeling and metrology of materials. Further, it addresses currently emerging characterization techniques such as optical and acoustic, vibrational spectroscopy (Brillouin, infrared, Raman), electronic, magnetic, fluorescence correlation imaging, laser lithography, small angle X-ray and neutron scattering and other techniques, including site-selective nanoprobes. The book analyzes the topological aspects to identify and quantify these effects in terms of topology metrics.

The topological materials are ubiquitous and range from (i) de novo nanoscale allotropes of carbons in various forms such as nanotubes, nanorings, nanohorns, nanowalls, peapods, graphene, etc. to (ii) metallo-organic frameworks, (iii) helical gold nanotubes, (iv) Möbius conjugated polymers, (v) block co-polymers, (vi) supramolecular assemblies, to (vii) a variety of biological and soft-matter systems, e.g. foams and cellular materials, vesicles of different shapes and genera, biomimetic membranes, and filaments, (viii) topological insulators and topological superconductors, (ix) a variety of Dirac materials including Dirac and Weyl semimetals, as well as (x) knots and network structures. Topological databases and algorithms to model such materials have been also established in this book.

In order to understand and properly characterize these important emergent materials, it is necessary to go far beyond the traditional paradigm of microscopic structure–property–function relationships to a paradigm that explicitly incorporates topological aspects from the outset to characterize and/or predict the physical properties and currently untapped functionalities of these advanced materials. Simulation and modeling tools including quantum chemistry, molecular dynamics, 3D visualization and tomography are also indispensable. These concepts have found applications in condensed matter physics, materials science and engineering, physical chemistry and biophysics, and the various topics covered in the book have potential applications in connection with novel synthesis techniques, sensing and catalysis. As such, the book offers a unique resource for graduate students and researchers alike.

Prof. Sanju Gupta is Associate professor and has substantial experience and expertise in functional nanomaterials and characterization with an emphasis on energy, water and biophysics- related research. Additionally, she is working in the area of topological and geometrical aspects of materials and co-authored publications on this topic including an invited feature article in MRS Bulletin and the recent News Feature in MRS Bulletin with the co-editor (Dr. Avadh Saxena) about the underpinning role(s) of topology in the 2016 Physics and Chemistry Nobel Prizes. She has co-organized several conferences and symposia on this topic as well as on advanced nanomaterials and applications. She has won many accolades (e.g. Recipient of NSF Fellowship, NIH Fellowship, DOE Fellowship, JSPS Fellowship and Junior Investigator Award, WISE Award) since her graduate study in addition to being well-placed and known in the materials community for more than two decades including the topology community. As a result, she is co-organizing an Applied Topology conference with colleagues in the Physics and Mathematics departments at WKU in 2018.

Dr. Avadh Saxena is Group Leader of the Condensed Matter and Complex Systems theory group at Los Alamos National Laboratory in New Mexico. He has extensive experience in working on topology related problems both in materials science and condensed matter physics with a large number of publications in this field. He is a Los Alamos National Laboratory Fellow and a Fellow of the American Physical Society. He serves on the advisory boards of several international conferences, has organized numerous workshops and symposia related to topology and functional materials (APS, MRS, SIAM, among others), has co-authored an MRS Bulletin article on this topic and a news Feature on 2016 Nobel Prizes, has co-edited four books (with Springer) and many special issues of research journals.  His recent work on topological defects, specifically the magnetic textures called skyrmions, has been featured in Discovery News. He holds Adjunct Professor positions at the University of Barcelona, University of Arizona and Virginia Tech.  Recently he was granted the prestigious Affiliate Professorship at the Royal Institute of Technology (KTH), Stockholm. He also serves as an advisor for the National Institute for Materials Science, Tsukuba, Japan.