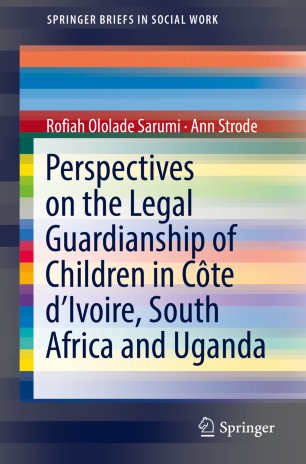 Perspectives on the Legal Guardianship of Children in Côte d'Ivoire, South Africa, and Uganda

Part of the SpringerBriefs in Social Work book series (BRIEFSSOWO)

This brief reference surveys the national policy of three representative African countries on the legal guardianship of children who are without parents or families. Focusing on the widely varying legal systems of Côte d’Ivoire, South Africa, and Uganda, the authors highlight guardianship as emblematic of the continent’s shortcomings in child protection laws. The book’s key objective is bridging the communal aspects of traditional African society with the global standards set forth by the Convention on the Rights of the Child and other international entities. To this end, the three frameworks discussed here are compared and their strengths and limitations evaluated as applied to child protection standards in terms of core guardianship issues:

The primary audience for Perspectives on the Legal Guardianship of Children in Côte d'Ivoire, South Africa, and Uganda includes academics, researchers, and students in the fields of children’s rights, human rights, legal guardianship, and international law. It will also prove a useful reference for NGOs that focus on children’s rights, social workers and practitioners operating within the context of these three countries, professionals working within the African human rights system, and governmental law- and policymakers.

Dr. Rofiah Ololade Sarumi graduated in 2001 with a degree in Law from the University of Ibadan, Nigeria. After her call to the Nigerian Bar, she proceeded to the University of Pretoria for a Master's degree in Human Rights and Democratisation in Africa in 2004. In 2014, Rofiah obtained a PhD in Law and she is currently a post-doctoral fellow at the College of Law and Management Studies at the University of KwaZulu-Natal. Rofiah is a published researcher with special interest in children's rights, right to health, sexual and reproductive health rights, and issues related to HIV/AIDS, gender, and general legal education.
Professor Ann Elaine Strode is the Academic Leader of Socio-Legal Studies at the School of Law, University of KwaZulu-Natal, South Africa. She teaches constitutional and human rights law to second year LLB and Legal Studies (non LLB) students. Before joining the University Ann worked as a human rights lawyer for a number of NGOs working on social justice issues. During this time she worked extensively on programmes addressing HIV as a human rights issue. She also spent a number of years in the HIV/AIDS Directorate at the Department of Health in Pretoria developing HIV policy for the new democratic government. Achievements included; being a member of the South African Law Reform’s Commission’s Project Committee on AIDS which made five legal and policy recommendations to various government departments, assisting with drafting of the sections on HIV in the Employment Equity Act and assisting in the development of the first para-legal manual on AIDS and the law. Since joining the University in 2001, Ann has re-focused her work around research and teaching.