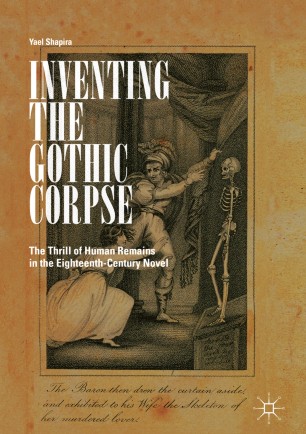 The Thrill of Human Remains in the Eighteenth-Century Novel

Inventing the Gothic Corpse shows how a series of bold experiments in eighteenth-century British realist and Gothic fiction transform the dead body from an instructive icon into a thrill device. For centuries, vivid images of the corpse were used to deliver a spiritual or political message; today they appear regularly in Gothic and horror stories as a source of macabre pleasure. Yael Shapira’s book tracks this change at it unfolds in eighteenth-century fiction, from the early novels of Aphra Behn and Daniel Defoe, through the groundbreaking mid-century works of Samuel Richardson, Henry Fielding and Horace Walpole, to the Gothic fictions of Ann Radcliffe, Matthew Lewis, Charlotte Dacre and Minerva Press authors Isabella Kelly and Mrs. Carver.

In tracing this long historical arc, Shapira illuminates a hidden side of the history of the novel: the dead body, she shows, helps the fledgling literary form confront its own controversial ability to entertain. Her close scrutiny of fictional corpses across the long eighteenth century reveals how the dead body functions as a test of the novel’s intentions, a chance for novelists to declare their allegiances in the battle between the didactic and the “merely” pleasurable.