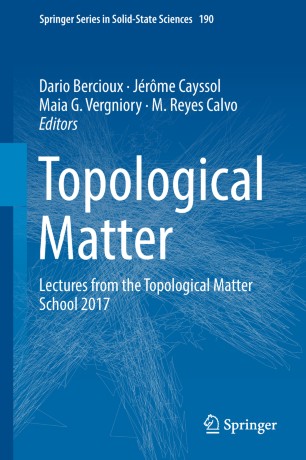 Lectures from the Topological Matter School 2017

This book covers basic and advanced aspects in the field of Topological Matter. The chapters are based on the lectures presented during the Topological Matter School 2017. It provides graduate level content introducing the basic concepts of the field, including an introductory session on group theory and topological classification of matter. Different topological phases such as Weyls semi-metals, Majoranas fermions and topological superconductivity are also covered. A review chapter on the major experimental achievements in the field is also provided. The book is suitable not only for master, graduate and young postdoctoral researchers, but also to senior scientists who want to acquaint themselves with the subject.

Maia G. Vergniory is an Assistant Professor at University of the Basque Country, Spain. She is involved on research including first principle calculations of electronic and magentic properties of bulk and surfaces of topological materials. Space and magnetic group theory are also among her interests.

Reyes Calvo is an Ikerbasque Research Associate at CIC Nanogune, Spain.  Besides experimental characterization of Topological Insulators by quantum transport and local probes, she is interested on magnetism at the nanoscale.