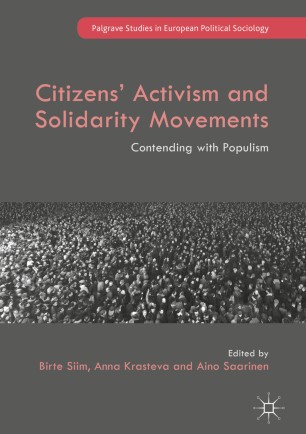 This book explores the activism and solidarity movements formed by contemporary European citizens in opposition to populism, which has risen significantly in reaction to globalization, European integration and migration. It makes the counterforces to neo-nationalisms visible and re-envisions key concepts such as democracy/public sphere, power/empowerment, intersectionality and conflict/cooperation in civil society. The book makes a theoretical and empirical contribution to citizenship studies, covering several forms such as contestatory, solidary, everyday and creative citizenship. The chapters examine the diverse movements against national populism, othering and exclusion in various parts of the European Union, such as Denmark, Finland, the UK, Austria, Germany, France, Bulgaria, Slovenia and Italy. The national case studies focus on counterforces to ethnic and religious divisions, as well as genders and sexualities, various expressions of anti-migration, Romanophobia, Islamophobia and homophobia. The book’s overall focus on local, national and transnational forms of resistance is premised on values of respect and tolerance of diversity in an increasingly multi-cultural Europe.

Birte Siim is Professor at the Department of Culture and Global Studies, Aalborg University, Denmark, where she has been responsible for Gender Research and Danish EU teams on European studies of citizenship, gender equality, nationalism, and diversity. Siim co-edited Negotiating Gender and Diversity in the European Public Sphere (2013).

Anna Krasteva is Professor of Political Sciences, Founder and Director of CERMES (Centre for Refugees, Migration and Ethnic Studies) at the New Bulgarian University, Bulgaria. She co-edited Recent Social Trends in Bulgaria (2000). She is editor-in-chief of the international journal Southeastern Europe.

Aino Saarinen is Senior Researcher Emerita at Aleksanteri Institute, Centre for Russian and Eastern European Studies, University of Helsinki, Finland, where she has been responsible for Nordic-Russian projects and Finnish-EU teams focusing on agency and gender violence, and migration. Saarinen co-edited Women and Transformation in Russia (2014).

“This is an uplifting book featuring studies across nine European states that provide an antidote to right-wing populism: activist citizenship. It meticulously documents that citizens and non-citizens are on the scene fighting effectively against classism, homophobia, Islamophobia, misogyny, racism, xenophobia, and the whole exclusionary apparatus that’s been gradually dismantled over the last few decades. It affirms decisively that these citizens and non-citizens are creating transversal dialogues across differences with intersectional political performatives.” (Professor Engin Isin, Queen Mary University of London, UK)

“This is an impressive and important volume, addressing some of the most urgent contemporary political issues such as resisting the rise of contemporary populist and right-wing movements in different parts of Europe. The book explores these issues through a nuanced, intersectional, comparative theoretical and methodological framework, combining sensitivity to different histories, spaces and differential power relations with the common impact of neo-liberal globalisation. The editors and the contributors are some of the best feminist and activist scholars in the field.” (Professor Nira Yuval-Davis, University of East London, UK)