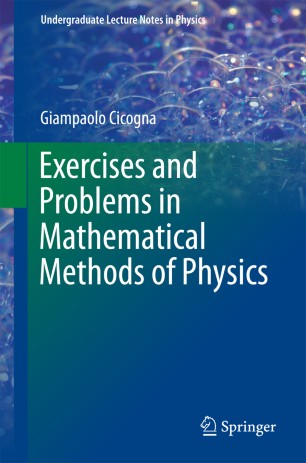 Exercises and Problems in Mathematical Methods of Physics

This book presents exercises and problems in the mathematical methods of physics with the aim of offering undergraduate students an alternative way to explore and fully understand the mathematical notions on which modern physics is based. The exercises and problems are proposed not in a random order but rather in a sequence that maximizes their educational value. Each section and subsection starts with exercises based on first definitions, followed by groups of problems devoted to intermediate and, subsequently, more elaborate situations. Some of the problems are unavoidably "routine", but others bring to the forenontrivial properties that are often omitted or barely mentioned in textbooks. There are also problems where the reader is guided to obtain important results that are usually stated in textbooks without complete proofs. In all, some 350 solved problems covering all mathematical notions useful to physics are included. While the book is intended primarily for undergraduate students of physics, students of mathematics, chemistry, and engineering, as well as their teachers, will also find it of value.

Giampaolo Cicogna worked at the University of Pisa in Italy from 1966 to 2012, as Assistant Professor of Geometry for Physicists and of Complementary Mathematics for Engineers (1966–80) and as Associated Professor of Mathematical Methods of Physics (1967–2012). He joined the university’s staff shortly after graduating in Physics "magna cum laude" at the Department of Physics of Pisa University in 1964. He worked as a collaborator with the Italian Istituto Nazionale di Fisica Nucleare (INFN, National Institute for Nuclear Physics) until 2015. Author of more than 120 publications in international scientific journals, he has acted as a referee for various journals and as a reviewer for academic institutions and for CINECA (referee evaluation procedure), a nonprofit consortium comprising Italian universities, Italian research institutions, and the Italian Ministry of Education, Universities and Research (MIUR).