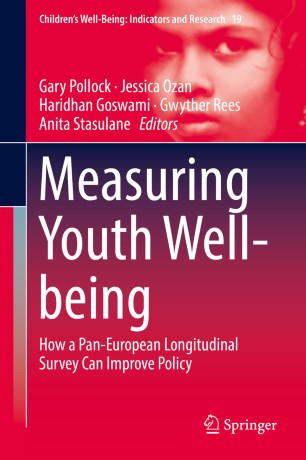 This volume presents key findings from the EU funded Measuring Youth Well-being (MYWeB) project which assessed the feasibility of a European Longitudinal Study for Children and Young People (ELSCYP). It draws on the original empirical data from a panel of experts in the field of child well-being as well as field experiences from a number of European countries.  MYWeB explored strategies and methodological challenges for involving children and young people in well-being research in order to fight poverty and social exclusion. It does so by evaluating different options to measure the well-being of children and young people across Europe using a child centric approach.

Written by experts researching children and young people from a variety of disciplinary backgrounds in the areas of sociology, psychology, political science, education, philosophy, economics, social policy, and evaluation.

Professor Gary Pollock
Gary is the Head of Sociology at Manchester Metropolitan University, a post he has held since 2008.  He is an expert in both child and youth studies having published in the field of child well-being, the transition from school to work, youth leisure and employment and youth political engagement.  Gary led the European Commission funded MYWeB (Measuring Youth Well-Being) project which provides the basis for the present book proposal.  This was an investigation into the desirability and feasibility of developing a longitudinal survey of the well-being of children and young people across Europe.   Gary co-led the European Commission funded MYPLACE (Memory, Youth, Political Legacy And Civic Engagement) project which studied the political and civic engagement of young people across Europe.  He was responsible for the survey elements of this project.  Gary’s methodological expertise lies in longitudinal survey analysis, in particular using sequence analysis.
Dr Jessica Ozan
Jessica is a Research Associate at the Policy and Evaluation Research unit, Manchester Metropolitan University.  She was the lead researcher on the MYWeB (Measuring Youth Well-Being) project and was central to the H2020 InnoSi (Innovative Social Investment: Strengthening communities in Europe) project.  Previous to this she was a doctoral fellow at UNESCO Child and Family Research Centre, National University of Ireland, Galway.  Jessica also worked as part of a team undertaking the Process Evaluation of the Tallaght West Childhood Development Initiative (Dublin, Ireland). This multi-faceted project aimed at improving the health, safety, learning, and overall wellbeing of children in the area.
Dr Haridhan Goswami
Haridhan has expertise in quantitative methods especially in survey design, testing reliability and validity of data collection instruments, multivariate analysis of data, and research with children and young people and their subjective well-being. He has experience of working in the Third Sector for almost 6 years and Higher Education for 9 years. Haridhan is currently working with the Q-Step Team in the Department of Sociology to enhance quantitative skills of undergraduate and postgraduate students under the Q-Step project-a national initiative and investment funded by the Nuffield Foundation, ESRC and HEFCE. He is the Programme Leader for the newly introduced postgraduate programme called MSc in Applied Quantitative Methods. Haridhan has led the curricula development for the MSc and the newly designed BSc in Quantitative Methods in the Department. In addition, he is providing expertise on quantitative methods, research with children and young people, and subjective well-being to two European Commission funded projects: MYPLACE (Memory, Youth, Political Legacy And Civic Engagement) and MYWeB (Measuring Youth Well-Being).  Prior to joining MMU, Haridhan worked as a Statistical Researcher in the Research Team of The Children’s Society (TCS). Whilst working with TCS, Haridhan led a number of quantitative research projects including two national surveys (2008 and 2010) on children and young people’s well-being in England, national survey on adults’ attitudes towards children and childhood, evaluation of the national peer-mentoring anti-bullying programme, and survey on professionals’ attitudes towards adolescent neglect. Haridhan publishes regularly in international journals and acts as a reviewer for academic journals, publishers, and funding bodies.
Gwyther Rees
Gwyther is currently Honorary Research Fellow, Social Policy Research Unit, University of York.  Prior to this he was Research Director, The Children’s Society.  Gwyther has a wealth of experience in relation to international surveys of child well-being in particular as a standing member of the central team which manages the International Survey of Children’s Well-Being.  Gwyther is widely published in the field of child well-being, both in the UK and comparatively.  Gwyther was an expert advisor on the MYWeB (Measuring Youth Well-Being) project.
Professor Anita Stasulane
Anita is Director of the Institute of Humanities and Social Sciences, Daugavpils University, Daugavpils, Latvia.  She is also Editor-in-Chief of “Cultural Studies” since 2008 and a member of a range of journal editorial boards.  Anita was team leader on three European Commission funded  projects:- Society and Lifestyles: Towards Enhancing Social Harmonisation through Knowledge of Subcultural Communities; MYPLACE (Memory, Youth, Political Legacy And Civic Engagement); MYWeB (Measuring Youth Well-Being).