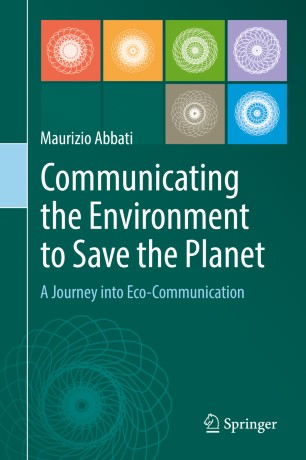 Communicating the Environment to Save the Planet

This book, based on authoritative sources and reports, links environmental communication to different fields of competence: environment, sustainability, journalism, mass media, architecture, design, art, green and circular economy, public administration, big event management and legal language. The manual offers a new, scientifically based perspective, and adopts a theoretical-practical approach, providing readers with qualified best practices, case studies and 22 exclusive interviews with professionals. A fluent style of writing leads the readers through specific details, enriching their knowledge without being boring. As such it is an excellent preparatory and interdisciplinary academic tool intended for university students, scholars, professionals, and anyone who would like to know more on the matter.

Born in Bologna in 1977, Maurizio Abbati first attended Liceo Classico (Classical High School) and in 2000 he graduated in Law at the University Alma Mater Studiorum of Bologna, with an experimental thesis in International Commercial Law and Maritime Navigation prepared at Institute of Advanced Legal Studies in London and University of Southampton.
He got two Second Level Masters’ degrees in International Relations and Environment and Sustainable Development. Between 2002 and 2006 he attended workshops in some of the most famous academic centres in Europe: The International Institute for Industrial Environmental Economics IIIEE - Lund (Sweden); Université de Versailles-Saint-Quentin-en-Yvelines – Paris (France); Sykli School of Environment - Helsinki (Finland); Centro de Estudios Ambientales del Mediterráneo (CEAM) - Universidad Autónoma de Barcelona (Spain). This academic track led him to his professional career as European Manager of the Environmental and Social Sustainability, Project Manager and Auditor ISO 14001.
In the academic domain he published several essays, among them a specific chapter in Luca Mezzetti: "La Costituzione delle Autonomie"/ The Constitution of Autonomies/, Edizioni Giuridiche Simone, Naples, 2004. He held conferences and courses among which: the seminar “Urban Sustainability and Local Agenda 21: the Ferrara Case Study” at the International Venice University, in July 2009 [in English]; the conference “Environmental Management Systems boost Green at the Italian Cultural Institute Krakow, May 2012; and the lecture on the same topic at Jagellonica University of Krakow, Economy Faculty, May 2012 [in English].
In the professional field he has successfully completed European projects, held conferences and published some articles on best practice and on certified Renewable Energy and Joint green public procurement (for Ferrara Municipality, Project Intelligent Energy pro-EE, 2009-2010; “5 Passi nella Green Way / Five steps in the Green Way/ – Green Management at Zero km: Sustainability Systems in comparison”, Giants’ Club Sanremo (Italian Flowers’ Riviera), May 2015.
In particular, the author has been experiencing, for almost ten years, a multitasking role with advanced communication skills. Consequently, he was able to create a network of international Experts operating in different sectors: a selected community whose contributions are included in this Manual in “The interviews with professionals” Section. After a long training and a careful examination, he got the journalist’s card and since 2014 he has been working as a freelance qualified editorial journalist in the Principality of Monaco, in France and in Italy. He took part in press projects in different languages (English, French, Spanish and Italian as a mother-tongue) writing articles specialized in legal, environmental, sustainable and communication topics.