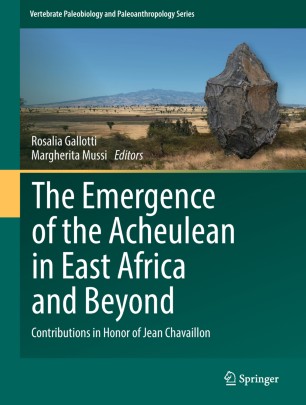 The Emergence of the Acheulean in East Africa and Beyond

Contributions in Honor of Jean Chavaillon

This edited volume presents current archaeological research and data from the major early Acheulean sites in East Africa, and addresses three main areas of focus; 1) the tempo and mode of technological changes that led to the emergence of the Acheulean in East Africa; 2) new approaches to lithic collections, including lithic technology analyses; and 3) the debated coexistence of the Developed Oldowan and the early Acheulean. The chapters are the proceedings from the workshop titled “The Emergence of the Acheulean in East Africa”, held at University of Rome “La Sapienza” on September 12–13, 2013. The aim of the workshop was to bring together researchers currently working in this field in East Africa, in order to define the characteristics and the evolution of the early Acheulean. The volume was expanded with some chapters on the preceding Oldowan, on the African fauna and on paleovegetation, on the Acheulean in Asia and, eventually, on the Acheulean in Europe.
The book is addressed to the scientific community, and will be of interest to researchers, graduate students, archaeologists, paleontologists, and paleoanthropologists.
This volume is dedicated to the memory of Jean Chavaillon (March 25, 1925 - December 21, 2013), the leading archaeologist and Quaternary geologist who researched with unfailing enthusiasm the earliest human cultures and directed from 1965 to 1995 the French Archaeological Mission at Melka Kunture.

Dr. Margherita Mussi is an Associate Professor at the Università di Roma La Sapienza. She is also a teaching member of the Postdoctoral Programme in Archaeology, Università di Roma LaSapienza. Her research interests include (a) The Palaeolithic peopling of Italy (mainland and islands), (b) Palaeolithic burials and art, and (c) human evolution in the Horn of Africa.
Dr. Rosalia Gallotti is a palaeolithic archaeologist primarily interested in (a) origin and evolution of the earliest hominin technical productions; and (b) development of computer assisted techniques for better documenting excavation and performing spatial analysis to analyse site formation processes. She is a researcher at the Université Bordeaux in France.