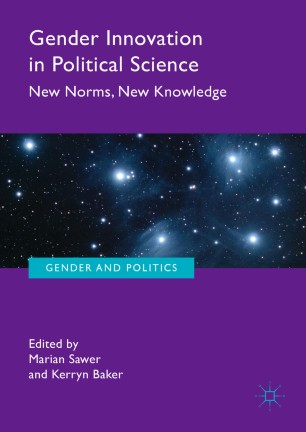 In this book, leading gender scholars survey the contribution of feminist scholarship to new norms and knowledge in diverse areas of political science and related political practice. They provide new evidence of the breadth of this contribution and its policy impact. Rather than offering another account of the problem of gender inequality in the discipline, the book focuses on the positive contribution of gender innovation. It highlights in a systematic and in-depth way how gender innovation has contributed to sharpening the conceptual tools available in different subfields, including international relations and public policy. At the same time, the authors show the limits of impact in core areas of an increasingly pluralised discipline. This volume will appeal to scholars and students of political science and international relations.

Kerryn Baker is Research Fellow in the Department of Pacific Affairs at the Australian National University. She has published in leading journals on issues of electoral reform and women’s political representation, and her book Pacific Women in Politics is forthcoming.

Marian Sawer is Public Policy Fellow and Emeritus Professor in the School of Politics and International Relations at the Australian National University. She has published 18 books ranging from gender and politics to electoral management, most recently Party Rules? Dilemmas of Party Regulation in Australia (co-edited with Anika Gauja, 2016).

“This book would be useful for students of identity politics and feminist theory to understand a specific perspective of political science, and the impacts it has had on practical applications of knowledge.” (Lindsay R. Martin, CBQ Communication Booknotes Quarterly, Vol. 51 (3-4), 2020)
Buy options