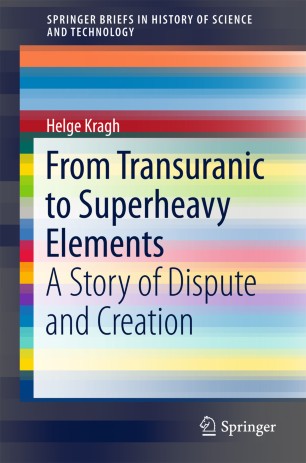 From Transuranic to Superheavy Elements

A Story of Dispute and Creation

The story of superheavy elements  - those at the very end of the periodic table  - is not well known outside the community of heavy-ion physicists and nuclear chemists. But it is a most interesting story which deserves to be known also to historians, philosophers, and sociologists of science and indeed to the general public. This is what the present work aims at. It tells the story or rather parts of the story, of how physicists and chemists created elements heavier than uranium or searched for them in nature. And it does so with an emphasis on the frequent discovery and naming disputes concerning the synthesis of very heavy elements. Moreover, it calls attention to the criteria which scientists have adopted for what it means to have discovered a new element. In this branch of modern science it may be more appropriate to speak of creation instead of discovery. The work will be of interest to scientists as well as to scholars studying modern science from a meta-perspective.