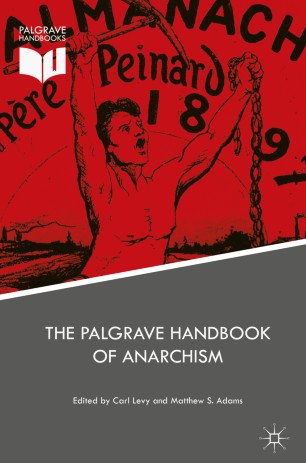 The Palgrave Handbook of Anarchism

This handbook unites leading scholars from around the world in exploring anarchism as a political ideology, from an examination of its core principles, an analysis of its history, and an assessment of its contribution to the struggles that face humanity today. Grounded in a conceptual and historical approach, each entry charts what is distinctive about the anarchist response to particular intellectual, political, cultural and social phenomena, and considers how these values have changed over time. At its heart is a sustained process of conceptual definition and an extended examination of the core claims of this frequently misunderstood political tradition. It is the definitive scholarly reference work on anarchism as a political ideology, and should be a crucial text for scholars, students, and activists alike.

Carl Levy is Professor of Politics at Goldsmiths, University of London, UK. He is the author of eleven single-authored and edited books and over 75 journal articles and chapters in edited books.
Matthew S. Adams is Lecturer in Politics, History and Communication at Loughborough University, UK. His first book focused on the work of Peter Kropotkin and Herbert Read, and examined their efforts to articulate a distinctive anarchist politics. He has published on parallel themes in a number of intellectual history and history of political thought journals.

“This resource provides a thorough account of anarchist history and ideas. … This exceptional book makes an important contribution to the study of this topic. Essays could be assigned to students in various disciplines including history, political science, environmental studies, and women’s studies. Summing Up: Highly recommended. Upper-division undergraduates through faculty.” (E. S. Danowitz, Choice, Vol. 56 (5), January, 2019)​
Buy options