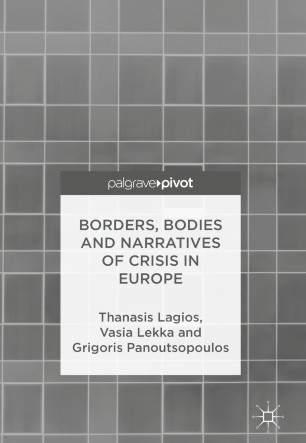 Borders, Bodies and Narratives of Crisis in Europe

This book critically discusses two crises that shape our present: migration crisis and 2007–2008 crisis. The first part raises several questions regarding migration, borders, labour, humanitarianism and biopolitics; the second part focuses on the false dilemma between an interpretation of contemporary crisis in the West as capitalist or humanist.
Thanasis Lagios is Teaching Assistant at the University of Athens, Greece.
Vasia Lekka is Adjunct Academic Staff at the Hellenic Open University, Greece.
Grigoris Panoutsopoulos is Researcher at the University of Athens, Greece.

“This book is bold, refreshing, and timely. It has the great merit of intertwining two usually separated themes—the migration crisis and the financial crisis—in an empirically sensitive and theoretically sophisticated manner. The result is a work so uncompromising in its commitment to the labor of critique that it furnishes us with a new lens for understanding and interrogating the multiple but related crises in our present.” (Marcelo Hoffman, author of Militant Acts: Investigations in Radical Political Struggles and Theories and Foucault and Power: The Influence of Political Engagement on Theories of Power)

“Through a sharp examination of the so-called 2015 refugee crisis and the 2007 financial crisis, this outstanding volume makes a crucial contribution to studies of the government of migration and politics of crisis in today’s Europe. It strikingly illuminates what is at stake in thinking these together and, in doing so, brings out genealogies of capitalism and bordering in Europe.” (Céline Cantat, Research Fellow, Central European University)

“By skillfully combining philosophical and political perspectives, this book’s main merit lies in its radical deconstruction of neoliberal discourse and its rhetoric of the crisis. It is, thus, an essential theoretical tool to see and understand Europe’s dark side that tends to become a landscape of control and de-humanization, whose borders embody the last frontier of exploitation and domination.” (Monia Cappuccini, author of Austerity and Democracy in Athens: Crisis and Community in Exarchia, Palgrave Macmillan)