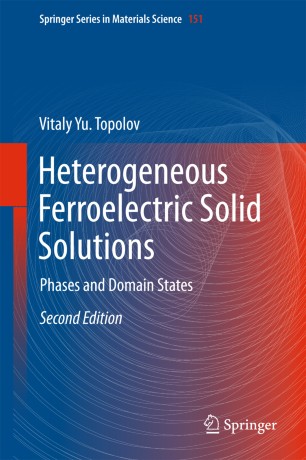 Vitaly Yuryevich Topolov received the the degrees “Candidate of Sciences (Physics and Mathematics)” and “Doctor of Sciences (Physics and Mathematics)” in 1987 and 2000, respectively from the Rostov State University, Russia. From 1987 to 1991, he worked as a Research Scientist of the Institute of Physics at the Rostov State University, from 1991 to 2000 as a Senior Lecturer (1991–1992) and an Associate Professor (1992–2000) of the Department of Physics at the Rostov State University. In 2000, he became an associate professor at the same Department. In 2011 he was appointed full professor of the Department of Physics and High Technologies at the Southern Federal University. He has been a Corresponding Member of the Russian Academy of Natural Science (Moscow, Russia9 since 2010).
He was also a visiting scientist at the Moscow State University, Russia (former USSR, 1989), University of Saarland, Germany (1994–1995), Aachen University of Technology – RWTH Aachen, Germany (1998), Karlsruhe Research Center, Germany (2002 and 2003–2004), University of Bath, UK (2006, 2007, 2012, 2013, and 2014), and University of Roma “Tor Vergata”, Italy (2008). His research interests include heterogeneous ferroelectrics, smart materials, domain and heterophase structures, as well as electromechanical effects in ferroelectrics and related materials. He earned the special award from the International Science Foundation (1993) and the Soros and awards from the International Soros Science-Educational Program and the Open Society Institute in 1997, 1998, 2000, and 2001.He authored three monographs published by Springer, various chapters in books published by Nova Science Publishers (New York, USA),and about 370 scientific papers.

The research interests of Prof. C. R. Bowen are concerned with functional ceramics, including ferroelectric ceramics and composites for modern sensors and actuators, as well as with manufacturing and characterisation of these materials. He earned the Thornton and Hazelwood prizes for academic work (1986–1990), Institute of Materials National Lecture Competition award (1993), SET award (2002), and John Willis award for excellence in research and teaching (2003). He is the author two monographs published at Springer  and chapters in monographs published at Nova Science. He has published approximately 200 scientific papers. He is currently supported by the European Research Council under the European Union's Seventh Framework Programme (FP/2007-2013) / ERC Grant Agreement no. 320963 on Novel Energy Materials, Engineering Science and Integrated Systems (NEMESIS).