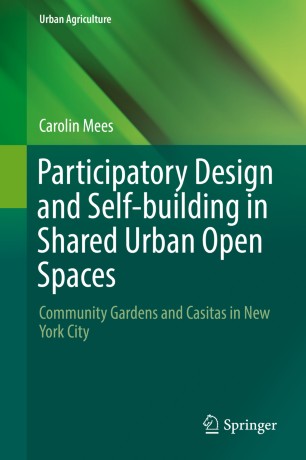 The book investigates the development of community gardens with self-built structures, which have existed as a shared public open space land use form in New York City’s low-come neighborhoods like the South Bronx since the 1970s. These gardens have continued to be part of the urban landscape until today, despite conflicting land use interests, changing residents groups and contradictory city planning. Both community gardens and self-built structures are created in a participatory design and self-built effort by urban residents and are an expression of the individual gardeners’ preferences, their cultural background and the decisions made by the managing residents’ group in regards to the needs of their neighborhood. Ultimately community gardens with self-built structures are an expression of the people’s will to commonly use this land for open and enclosed structures next to their homes in the city and need to be included in future urban planning.

Carolin Mees holds a Dr. Ing./PhD in Architecture and a Dipl.Ing/ M.A. in Architecture, both from the Berlin University of Arts, as well as a Vordiplom/ B.A. in Architecture from the University of Fine Arts in Hamburg, Germany. With her office mees architecture Carolin Mees has designed community-based open space structures since 2007, when she led the participatory design of the Gardenhaus shelter structure for the municipal community gardens program of New York City, GreenThumb. Carolin Mees has been the Project and Design Coordinator for New York City’s Mayor’s Offices Gardens for Healthy Communities Initiative that resulted in the participatory design and self-building of 13 new community gardens from 2012-2014. She has continued to work as an architect and researcher in the field of community-based urban design and has published widely about her research. Carolin Mees has been teaching in the field of architecture, landscape architecture, sustainable systems and designing urban agriculture at various universities in Europe and North-America since 2009.