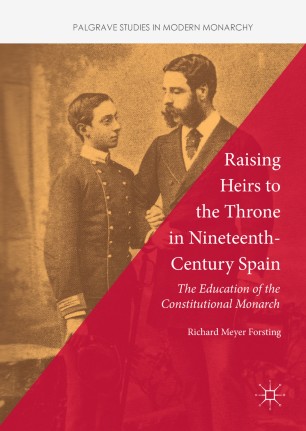 Raising Heirs to the Throne in Nineteenth-Century Spain

The Education of the Constitutional Monarch

This book analyses royal education in nineteenth-century, constitutional Spain. Its main subjects are Isabel II (1830- 1904), Alfonso XII (1857-1885) and Alfonso XIII (1886-1941) during their time as monarchs-in-waiting. Their upbringing was considered an opportunity to shape the future of Spain, reflected the political struggles that emerged during the construction of a liberal state, and allowed for the modernisation of the monarchy. The education of heirs to the throne was taken seriously by contemporaries and assumed wider political, social and cultural significance. This  volume is structured around three powerful groups which showed an active interest, influenced, and significantly shaped royal education: the court, the military, and the public. It throws new light on the position of the Spanish monarchy in the constitutional state, its ability to adapt to social, political, and cultural change, and its varied sources of legitimacy, power, and attraction.