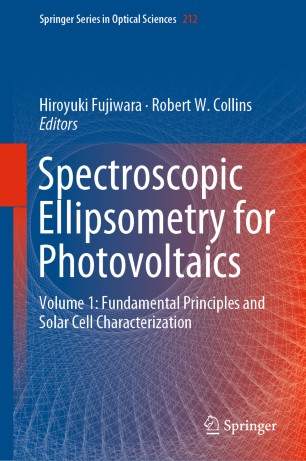 This book provides a basic understanding of spectroscopic ellipsometry, with a focus on characterization methods of a broad range of solar cell materials/devices, from traditional solar cell materials (Si, CuInGaSe2, and CdTe) to more advanced emerging materials (Cu2ZnSnSe4, organics, and hybrid perovskites), fulfilling a critical need in the photovoltaic community.

Hiroyuki Fujiwara received the Ph.D. degree from Tokyo Institute of Technology. He was a research associate at The Pennsylvania State University. In 1998, he joined Electrotechnical laboratory, Ministry of International Trade and Industry, Japan. Later in 2007, he became a team leader of Research Center for Photovoltaics, National Institute of Advanced Industrial Science and Technology (AIST) in Japan. He is currently a  professor in the Department of Electrical, Electronic and Computer Engineering, Gifu University.

Robert W. Collins received the Ph.D. degree from Harvard University. He worked at BP America/Standard Oil Co. In 1992, he became a professor of Physics and Materials Research at The Pennsylvania State University. He is currently a Distinguished University Professor and NEG Endowed Chair of Silicate and Materials Science with the Department of Physics and Astronomy, University of Toledo. He co-directs the Center for Photovoltaics Innovation and Commercialization.