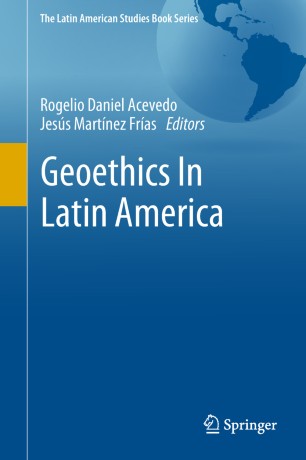 Geoethics is a key discipline in the field of Earth and Planetary Sciences, and not only includes scientific, technological, methodological and social-cultural aspects, but also addresses the need to consider appropriate protocols, scientific integrity issues and a code of good practice when studying the abiotic world.

The position of Latin America’s recently created geoethics associations is based on protection of the environment, together with a reassurance that the balance of nature and the rights of human beings to enjoy it will be preserved.

Rogelio Daniel Acevedo is an Argentine geologist graduated at the University of Buenos Aires in 1980 and 1990. He was born in Tres Arroyos, Buenos Aires Province on March 7, 1956. He was a Fellow of the UNESCO, the European Economic Community and the National Geographic and also Professor of Mineralogy and Petrology at the Argentine universities of Buenos Aires, Morón, Patagonia San Juan Bosco, and Oviedo (Spain). At present, he serves as scientific researcher for National Scientific and Technical Research Council (CONICET).
Prof. Acevedo lives in Ushuaia, the city of the end of the world. During the last three decades he has been involved in a wide variety of research and applied topics relating to geologic aspects. His main research interests are in the broad area of regional geology of Tierra del Fuego, particularly in terms of recognizing geologic resources in the Fuegian Andes as consultant. He is also specialised in planetary geology, identifying impact structures in Patagonia and Puna and studying meteorites.
His scientific work is published in approximately 200 peer reviewed papers in external journals, scientific non-peer-reviewed articles, books and edited volumes, book chapters, memoirs, abstracts, conference papers, field guides, popular science writes, scientific journalism articles and commentaries. He has supervised many theses and scholarships.
Currently, Prof. Acevedo is recognized by the International Association for Geoethics and appointed as Vice-President representing Latin America.
Jesús Martínez Frías, born in Madrid, on October 3, 1960, is a Spanish geologist graduated at the Complutense University of Madrid in 1982, where he also obtained his PhD degree in 1986. He has developed several stays of research in UK (University of Leeds), Canada (University of Toronto), Germany (University of Heidelberg) and the USA (University of California). He is Scientific Researcher at the Geosciences Institute, IGEO (CSIC-UCM), Head of the Research Group of Meteorites and Planetary Geosciences and founder and Director of the Spanish Planetology and Astrobiology Network. He has participated in more than 40 projects and scientific campaigns (e.g. Antarctica, Mauritania, Iceland, Costa Rica). In 2002, he participated in the NASA flight to study the Leonid Meteor Shower. He is co-I in NASA-MSL (rover Curiosity), ESA-ExoMars and NASA-Mars2020 and in 2016 and 2017 heas was instructor of ESA astronauts in the PANGAEA program (Lanzarote and Chinijo Islands UNESCO Global Geopark). He has published 8 books and more than 200 articles (Science, Nature, Geology, etc). He was Former Member of the UN ECOSOC Committee on Natural Resources, Ex-ViceChair of the UNCSTD and Ex-Chair of IUGS-COGE. He is co-founder and President of the International Association for Geoethics (IAGETH) and President of the Geoethics Commission of the Spanish Association of Geologists (ICOG). He is Editor-in-Chief of the journal Geosciences (MDPI) and co-editor of the Springer Book Series: Geoheritage, Geoparks and Geotourism. He has received several awards and recognitions (i.e. NASA, ESA, GSAf, ArabGU, Spanish Association of Scientists).

“This book moves us towards the goal that geoethics will reach an even larger audience of South American geologists as well as other geoscientists interested in working in this part of the world. ... Geoethics in Latin America is a well-structured collection and a very useful research book which can serve as a reference for researchers-academics, educators, and students interested in geoethics.” (Mohamed Abioui, Lhassan M’Barki, Mohammed Benssaou, Andrea Di Cencio and Mohamed Dades, Science and Engineering Ethics, Vol.25, 2019)
Buy options