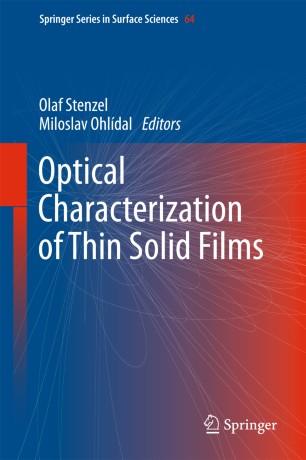 This book is an up-to-date survey of the major optical characterization techniques for thin solid films. Emphasis is placed on practicability of the various approaches. Relevant fundamentals are briefly reviewed before demonstrating the application of these techniques to practically relevant research and development topics. The book is written by international top experts, all of whom are involved in industrial research and development projects.

Olaf Stenzel finished his diploma thesis in laser spectroscopy at the physics department of Moscow State University, Russia, in 1986. He received his PhD from Chemnitz University of Technology, Germany, in 1990 and habilitated there in 1999 in the field of optical properties of heterogeneous optical coatings. From 2001, he has worked at the Optical Coating Department of Fraunhofer Institute for Applied Optics and Precision Engineering IOF in Jena, Germany. There he worked for several years as  the group manager for optical coating characterization. He is the author of The Physics of Thin Film Optical Spectra: An Introduction, (Springer 2005, 2015) and Optical Coatings: Material Aspects in Theory and Practice, (Springer 2014). Currently his focus is on teaching at the Abbe School of Photonics at Friedrich Schiller Universität Jena, Germany, where he reads lectures on "Structure of Matter" and "Thin Film Optics" for master of photonics students. He is a member of OSA - The Optical Society.

Miloslav Ohlídal is a Professor of Applied Physics at the Brno University of Technology, Czech Republic. He was educated at the Masaryk University Brno, Czech Republic, where he received his RNDr. (1975) and Ph.D. (1989) degrees in Physics. From 1977-1981 he was a research worker at the Military Institute 060, where he dealt with military applications of lasers. Since 1981 he is engaged in the optical research at the Institute of Physical Engineering, Brno University of Technology. He directs the Laboratory of Coherent Optics. His research spans the various aspects of optics of thin films, laser light scattering, study of surface topography by optical methods, and optical instruments designing. Over the several past years his group has developed the technique of imaging spectroscopic reflectometry for optical characterization of thin films. He cooperates closely with industry. Prof. M. Ohlídal is a member of SPIE - The International Society for Optical Engineering, OSA-The Optical Society, and The Union of Czech Mathematicians and Physicists.