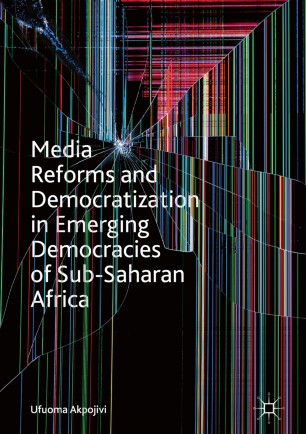 Media Reforms and Democratization in Emerging Democracies of Sub-Saharan Africa

This book examines the media reform processes and re-democratization projects of Ghana and Nigeria’s emerging democracies. It evaluates and critiques these reform processes, arguing that because of dependency approaches resulting from the transplanting of policy framework from the West into these emerging democracies, the policy goals and objectives of the reforms have not been achieved. Consequently, the inherent socio-cultural, economic and political factors, coupled with the historical antecedents of these countries, have also affected the reform process.

Drawing from policy documents, analyses and interviews Ufuoma Akpojivi argues that the lack of citizens’ active participation in policy processes has led to neo-liberalization and the continued universalization of Western ideologies such as democracy, media freedom and independence. Akpojivi posits that the recognition of socio-cultural, political and economic factors inherent to these emerging democracies, coupled with the communal participation of citizens, will facilitate true media reform processes and development of these countries.

Ufuoma Akpojivi is Senior Lecturer in the Media Studies Department at the University of the Witwatersrand, South Africa. His research interests cut across media policy, democratization and new media and citizens’ engagement. He is a National Research Foundation (NRF) South Africa rated researcher and a fellow of the African Humanities Program (AHP) of the American Council of Learned Societies.