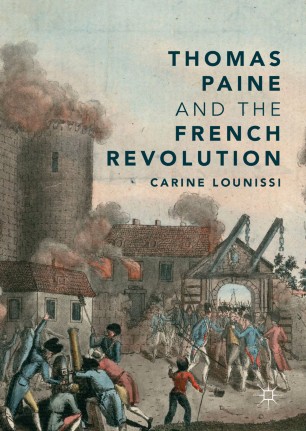 Thomas Paine and the French Revolution

This book explores Thomas Paine's French decade, from the publication of the first part of Rights of Man in the spring of 1791 to his return trip to the United States in the fall of 1802. It examines Paine's multifarious activities during this period as a thinker, writer, member of the French Convention, lobbyist, adviser to French governments, officious diplomat and propagandist. Using previously neglected sources and archival material, Carine Lounissi demonstrates both how his republicanism was challenged, bolstered and altered by this French experience, and how his positions at key moments of the history of the French experiment forced major participants in the Revolution to defend or question the kind of regime or of republic they wished to set up. As a member of the Lafayette circle when writing the manuscript of Rights of Man, of the Girondin constellation in the Convention, one of the few democrats who defended universal suffrage after Thermidor, and as a member of the Constitutional Circle which promoted a kind of republic which did not match his ideas, Paine baffled his contemporaries and still puzzles the present-day scholar. This book intends to offer a new perspective on Paine, and on how this major agent of revolutions contributed to the debate on the French Revolution both in France and outside France.