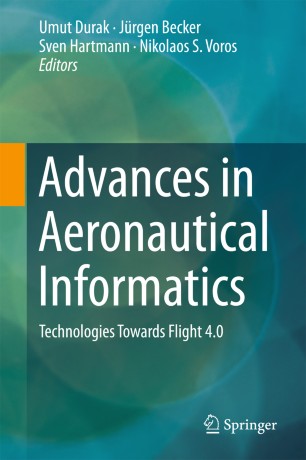 The history of flight started with the pioneer era. The introduction of mechanical controls (including hydraulics) then led to the second era. Later, with the utilization of computers and automation in aircraft, we reached the third era. Now, we are moving towards the fourth era of flight, namely Flight 4.0, which is characterized by “smart” and “connected” aircraft that extensively exploit emerging information and communication technologies.
Aeronautical informatics is advancing rapidly through the synergy between information and communication technologies and aeronautics. Multi-core avionic platforms, wireless avionics networking, service-oriented architectures and IoT, data sciences and semantic infrastructures are shaping systems to come. Increasing autonomy requirements are challenging the community to investigate new ways to assure safety. Modern software engineering methodologies and real-time software techniques are altering the established development practice. Universities are starting to align their aerospace engineering and computer science curriculums in order to address this synergy.
This book is a unique compilation of advancements in aeronautical informatics, introducing the changing technology landscape of flight with respect to a new push in information and communication technology.

Umut Durak is a research scientist in the Institute of Flight Systems at the German Aerospace Center (DLR). He is also an adjunct faculty in the Department of Informatics at Clausthal University of Technology. His research focus is modeling and simulation based approaches in aeronautics. He received his BS, MS and Ph.D. degrees in Mechanical Engineering from Middle East Technical University (METU) in Turkey. He is a member of the Society for Computer Simulation International (SCS) and Arbeitsgemeinschaft Simulation (ASIM) and a senior member of the American Institute of Aeronautics and Astronautics (AIAA). And, he is a part of AIAA Modeling and Simulation Technical Committee and editorial teams of the Simulation: Transactions of the Society for Modeling and Simulation International; and the International Journal of Modeling, Simulation, and Scientific Computing.
Jürgen Becker received the Diploma and Ph.D. (Dr.-Ing.) degree from Technical University Kaiserslautern, Germany. He is a full professor for embedded electronic systems and Head of the Institute for Information Processing Technologies (ITIV) at the Karlsruhe Institute of Technology (KIT). From 2005-2009 he has been appointed as Vice President for Education at Universitaet Karlsruhe (TH) and Chief Higher Education Officer (CHEO) at KIT from 2009-2012. Since 2012 till 2014 he served as Secretary General of CLUSTER, an association of 12 leading technical universities in Europe. In 2013 Prof. Becker received the Honorary Doctor award (Dr. h.c.) from Technical University Budapest (Hungary). His research interests include Hardware/Software Systems-on-Chip (SoC), Cyber-Physical Systems (CPS), Heterogenous Multicore (MC) Architectures, Reconfigurable Computing, Fast Data Acquisition, Filtering and Storage for Semiconductor Detectors. He authored more than 400 papers in international journals and conferences.
Sven Hartman received his Ph.D. in 1996 and his D.Sc. in 2001, both from the University of Rostock (Germany). From 2002-2007 he worked first as an associate professor, then full professor for information systems at Massey University (New Zealand). Since 2008 he is a full professor of computer science and chair of databases and information systems at Clausthal University of Technology (Germany). There he is also serving as academic dean at the Faculty of Mathematics/Informatics and Mechanical Engineering since 2013. His research interests include databases and data management, conceptual modelling, big data, optimal discrete structures and algorithms, and information systems and services.
Nikolaos S. Voros received his Diploma in Computer and Informatics Engineering, in 1996, and his PhD degree, in 2001, from University of Patras, Greece. His research interests fall in the area of Cyberphysical/embedded system design, and include specification techniques, hardware-software co-design, formal refinement techniques, and reuse practices. Dr Voros is Associate Professor at Technological Institute of Western Greece, Department of Computer and Informatics Engineering where he is leading the Embedded Systems Design and Applications Laboratory (http://esda-lab.cied.teiwest.gr). During the last years, Dr Voros has participated in more than 30 research projects funded by European Commission either as project manager or as scientific advisor. He has served as scientific coordinator of FP7 STREP Project 287733 ALMA and ICT coordinator for FP7 STREP Project 287720 ARMOR; currently, Prof. Voros is the scientific coordinator of Horizon 2020 Project ARGO and the technical coordinator of Horizon 2020 Project RADIO. Dr Voros has published significant number of books and referred articles in international journals and conferences, while he is also editor of the books «System Level Design with Reuse of System IP», «System Level Design of Reconfigurable Systems-on-Chip» and «Components and Services for IoT platforms: paving the way for IoT standards» published by Springer. He has also served as General Chair in well-known international conferences like the IEEE Computer Society Annual Symposium on VLSI (2010) and the 14th International Symposium on Applied Reconfigurable Computing (2018). He was also the Program Co-Chair for 24th International Conference on Field Programmable Logic and Applications (2014) and for the 7th International Workshop on Reconfigurable and Communication-centric Systems-on-Chip (2012).

“Advances in aeronautical informatics is a work that deserves consideration … . Each chapter is a deep dive into a specific subject, composed in different styles and with different formats, and could be read as a standalone paper. There is a vast body of citations.” (A. Squassabia, Computing Reviews, February, 2019)