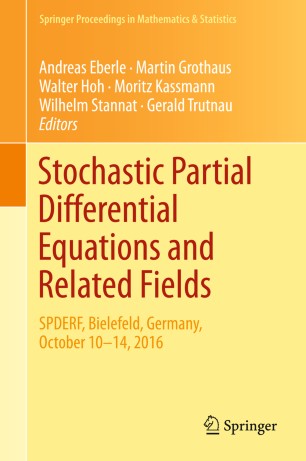 This Festschrift contains six research surveys and thirty-three shorter contributions by participants of the conference ''Stochastic Partial Differential Equations and Related Fields'' hosted by the Faculty of Mathematics at Bielefeld University, October 10–14, 2016. The conference, attended by more than 140 participants, including PostDocs and PhD students, was held both to honor Michael Röckner's contributions to the field on the occasion of his 60th birthday and to bring together leading scientists and young researchers to present the current state of the art and promising future developments.

Each article introduces a well-described field related to Stochastic Partial Differential Equations and Stochastic Analysis in general. In particular, the longer surveys focus on Dirichlet forms and Potential theory, the analysis of Kolmogorov operators, Fokker–Planck equations in Hilbert spaces, the theory of variational solutions to stochastic partial differential equations, singular stochastic partial differential equations and their applications in mathematical physics, as well as on the theory of regularity structures and paracontrolled distributions.

The numerous research surveys make the volume especially useful for graduate students and researchers who wish to start work in the above-mentioned areas, or who want to be informed about the current state of the art.