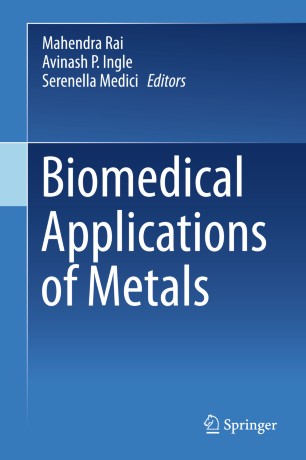 Focused more specifically on the recent advances in applications of various metals and their complexes used in biomedicine, particularly in the diagnosis and treatment of chronic diseases. The editors give equal importance to other key aspects such as toxicological issues and safety concerns. The application of metals in the biomedical field is highly interdisciplinary and has a broad appeal across all biomedical specialties. Biomedical Applications of Metals is particularly focused on covering the role of metals in medicine and the development of novel therapeutic products and solutions in the form of alternative medicines, and some topics on Indian traditional medicine i.e., “Ayurveda”. In Section I, the book discusses the role of metals in medicines and include chapters on nanoparticles, noble metals, medical devices, copper. selenium, silver, and microbial pathogens; while Section II includes topics on metals toxicity including heavy metals, carcinogens, cancer therapy, Bhasma’s and chelating agents used in Ayurveda, and biochemical and molecular targets including actions of metals. These new and emerging concepts of applications of metals in medicine, their crucial role in management of microbial resistance, and their use in the treatment of various chronic diseases is essential information for toxicologists, and clinical and biomedical researchers.

Mahendra Rai is a Senior Professor at the Department of Biotechnology, Sant Gadge Baba Amravati University at Amravati, Maharashtra, India. He was a Visiting Scientist at the Department of Bioenergetics, University of Geneva, Switzerland in 2004 and at the Department of Plant Protection of Debrecen University, Debrecen, Hungary in 2005 and 2008. He visited Department of Chemical Biology, University of Campinas, Brazil under Indo-Brazil Research Programme (DST-CNPq collaboration) in 2009, 2011 and 2012. In 2012, he was visiting Professor in Nicolaus Copernicus University, Torun, Poland. In 2013, he was visiting scientist in State University of Campinas, Brazil. He was also visiting professor in 2015 in Ostrava, Czech Republic and in 2016 in National University of Rosario, Argentina. His area of expertise includes microbial biotechnology and nanobiotechnology. His present research interest include application of nanobiotechnology in medicine with particular reference to development of nanoantimicrobials. He has published more than 350 research papers in national and international journals. In addition, he has edited/authored more than 40 books and 6 patents. Recently, he has been awarded Basic Science Research Faculty Fellowship by University Grants Commission, New Delhi, Government of India.

Dr. Avinash P. Ingle has completed his doctoral degree from Department of Biotechnology, Sant Gadge Baba Amravati University, Amravati, Maharashtra (India) in 2012. Further, he worked as Research Scientist in the same department from 2013-2016. He has more than 55 research publications, 26 book chapters and 1 book to his credit. He has been awarded travel grants from different funding/sponsoring agencies to present his research work in international conferences held at Malaysia, China, Spain and France. His area of research mainly includes microbial biotechnology, nanobiotechnology and biofuel technology. Currently Dr. Ingle is working as Post-Doctoral Fellow at Department of Biotechnology, Engineering School of Lorena - University of São Paulo, Brazil and he is actively engaged in development nanotechnology based methods for the efficient production of biofuels.

Serenella Medici currently working as Assistant professor of General and Inorganic Chemistry at the University of Sassari, Italy, after receiving her PhD in Chemistry in Sassari she worked as a Post-Doctoral Fellow at the Debye Institute, University of Utrecht (the Netherlands), and was a visiting researcher at the Rovira i Virgili University (Tarragona, Spain) and Cerm (Centre for Magnetic Resonances, University of Florence, Italy). Her research interests include the study of organometallic complexes, metal ion-protein interactions, toxicity mechanisms and carcinogenesis of heavy metals, NMR applications and archaeometry.