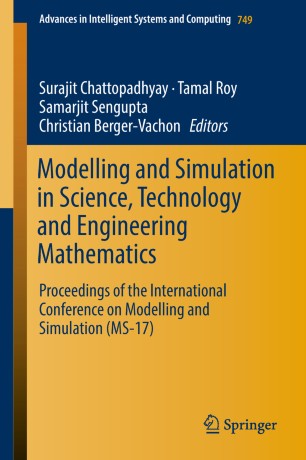 Modelling and Simulation in Science, Technology and Engineering Mathematics

Proceedings of the International Conference on Modelling and Simulation (MS-17)

Part of the Advances in Intelligent Systems and Computing book series (AISC, volume 749)

This volume contains the peer-reviewed proceedings of the International Conference on Modelling and Simulation (MS-17), held in Kolkata, India, 4th-5th November 2017, organized by the Association for the Advancement of Modelling and Simulation Techniques in Enterprises (AMSE, France) in association with the Institution of Engineering Technology (IET, UK), Kolkata Network.

The contributions contained here showcase some recent advances in modelling and simulation across various aspects of science and technology. This book brings together articles describing applications of modelling and simulation techniques in fields as diverse as physics, mathematics, electrical engineering, industrial electronics, control, automation, power systems, energy and robotics.  It includes a special section on mechanical, fuzzy, optical and opto-electronic control of oscillations.

It provides a snapshot of the state of the art in modelling and simulation methods and their applications, and will be of interest to researchers and engineering professionals from industry, academia and research organizations.

Surajit Chattopadhyay has obtained B. Sc. Degree in Physics Honours from Ramakrishna Mission Vidyamandir (Belur Math), University of Calcutta in 1998, and then B. Tech., M. Tech. & Ph. D. (Technology) Degree in electrical engineering from Department of Applied Physics of University of Calcutta in 2001, 2003, 2010 respectively. He has obtained CEng from Engineering Council, UK in 2013. He has authored/coauthored around hundred papers published in international and national journals and conferences and four books (also with Springer). Seven papers have been selected as “Best Paper” in international level. He has visited many countries for technical interaction like in Lyon (France), Kuala Lumpur (Malaysia), Dhaka (Bangladesh), London & Stevenage (UK) and Negombo (Sri Lanka) and presented his work in different international forums. Presently, he served as Dean (Student Welfare), Academic Coordinator and Associate Professor of Electrical Engineering in Ghani Khan Choudhury Institute of Engineering and Technology (under Ministry of HRD, Govt. of India). He served as Hon. Secretary of the Institution of Engineering and Technology (UK), Kolkata Network from 2013 to 2016 and now Executive Committee Member of the Network. His field of interest includes electric power quality, fault diagnosis, power system protection, signal analysis, robotics application and UAV.

Samarjit Sengupta holds a B.Sc, B.Tech, M.Tech, and Ph.D from the University of Calcutta, Kolkata, India. He is currently a professor of electrical engineering in the Department of Applied Physics at the University of Calcutta. He has published 130 journal papers and eight books on various topics of electrical engineering. His main research interests include power quality instrumentation, power system stability, and security and power system protection. He is a fellow of IET and IETE, as well as a senior member of IEEE. He is former Chairman of IET (UK) Kolkata Network.

In 1974, he joined the Department of Electrical Engineering, University of Lyon, as a Lecturer, and in 1989 he was named Professor. He was given the title of emeritus Professor in 2013 and since then allowed to continue his research activity in the university.

His current research interests include signal processing in electrical machines and in hearing aid devices, and also the construction of models in close connection with the patients’ behavior. He is also involved in sports mechanics and in sports medicine. He is the General Secretary of AMSE, an international association concerned with the edition of scientific journals and with the organization of scientific conferences throughout the world. He is the vice-chairman of IFRATH a French Association concerned with the use of assistive devices for handicapped people. He was the recipient of the “Academic Palms” awarded by the French government for his academic career in 2014.