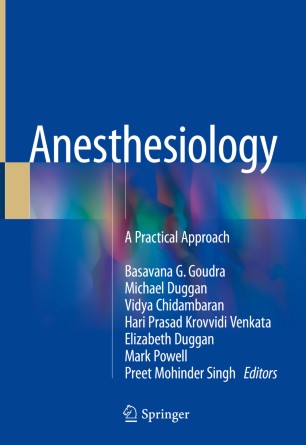 This book provides a practical approach to the anesthetic management of surgical and nonsurgical procedures across the spectrum of anesthesia sub-specialties. This book will assist the practitioner to plan their anesthetic from preoperative evaluation phase to complete recovery or transfer to another special care area. The emphasis is on both the planned technique and more importantly the logic or reasoning behind the suggested technique.

This book addresses all important procedures in anesthesiology, including preoperative evaluation, airway management, and fluid administration. Every chapter discusses a specific surgery or procedure. Some topics of special interest are also included.

Anesthesiology: A Practical Approach is aimed at anesthesia residents, anesthesia nurse practitioners, and experienced anesthesiologists called upon to work in any area or anesthetizing location.

Basavana G. Goudra MD, FRCA, FCARCSI  Basavana Goudra MD FRCA FCARCSI, the principal editor of the book “Anesthesiology-A Practical Approach”, is a clinical associate professor of anesthesiology and critical care medicine at the Hospital of the University of Pennsylvania, Philadelphia, USA. He is an internationally recognized expert in the area of out of operating room anesthesia, specifically in the field of gastrointestinal endoscopy. Dr Goudra graduated from Bangalore Medical College, Bangalore, India and completed his residency at the Jawaharlal Nehru Institute of Medical Education and Research, Pondicherry, India. After further training in the Republic of Ireland and Cincinnati Children’s Hospital, Cincinnati, USA, he was appointed as a consultant anesthetist at the Russells Hall Hospital, United Kingdom. In 2008, he was appointed as a member of faculty in the Hospital of the University of Pennsylvania. He has over sixty PubMed indexed publications that include scientific papers, case reports, meta-analysis, reviews and editorials on a wide range of anesthesia and pain related topics. He lectures at the American Society of Anesthesiology annual meetings on a regular basis. He has invented airway devices including the “Goudra Bite Block” and “Goudra Mask Airway”, which will improve the safety of upper gastrointestinal endoscopy in the years to come. He is also working on a number of other projects in the area of graduate medical student and resident education.The book “Out of Operating Room Anesthesia-A Comprehensive Review”, edited by Dr Goudra has been acclaimed by reviewers and is popularly used in the field.

Vidya Chidambaran MBBS, MDDr Chidambaran is an Associate Professor of Anesthesia and Perioperative Pain at Cincinnati Children’s Hospital Medical Center and University of Cincinnati College of Medicine. She completed her medical degree at Bangalore Medical College, India in 1996 and her MD in Anesthesia from Katsurba Medical College, India in 2000. She then completed an internship, residency and fellowship in the USA, at Jackson Memorial Hospital, Brookdale University Hospital and John Hopkins Hospital, respectively. She became Anesthesia Board certified in 2008 and Pediatric Anesthesia Board certified in 2014.

Hari Prasad Krovvidi Venkata MBBS, MD, FRCA Dr Krovvidi Venkata gained his medical degree from Gandhi Medical College, Hyderabad, India in 1996 and his MD in Anesthesia from the Postgraduate Institute of Medical Education and Research, Chandigarh, India in 1999. He completed various Senior House office roles in India and the UK, before becoming a Specialist Registrar at Birmingham School of Anesthesia, UK, where he is now a Consultant in Neuroanesthesia.

Dr. Elizabeth Duggan MD Dr. E. Duggan is an Assistant Professor at Emory University School of Medicine in Atlanta, Georgia. She completed her internship at Duke University Medical Center and residency training at the University of Pennsylvania. Additionally, she spent an additional post-graduate training year as a liver transplant fellow at the University of Pennsylvania. Dr. Duggan joined the faculty at Thomas Jefferson University as the Director of Hepatobiliary Anesthesia and later, transitioned to Emory SOM. While on staff at Emory University Hospital, she has held the roles of Director of Vascular Anesthesia, Medical Director of the PACU and most recently, has been appointed the Chief of Service for the General, Vascular, Neuroanesthesia and Kidney/Liver Transplant Service. Her primary clinical roles are as a member of the liver transplant and vascular teams; her research focus lies within perioperative outcomes specifically in obstructive sleep apnea and stress hyperglycemia.

Dr Preet Mohinder Singh MD Dr Preet Mohinder Singh is an Assistant Professor of Anesthesiology, Pain medicine and Critical Care at All India Institute of Medical Sciences (AIIMS), New Delhi, India. After completing his residency from AIIMS, Delhi, he joined the department of anesthesia as a faculty.  His main area of focus is outcomes research, statistics in medicine and out of operating room anesthesia. He has been a part of many research projects and published extensively in the above areas. He is also the co-editor of the book ‘Out of Operating Room Anesthesia: A Comprehensive review’.