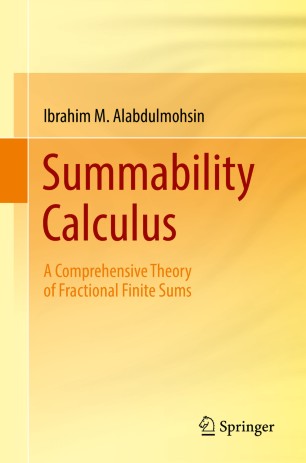 This book develops the foundations of "summability calculus", which is a comprehensive theory of fractional finite sums. It fills an important gap in the literature by unifying and extending disparate historical results. It also presents new material that has not been published before. Importantly, it shows how the study of fractional finite sums benefits from and contributes to many areas of mathematics, such as divergent series, numerical integration, approximation theory, asymptotic methods, special functions, series acceleration, Fourier analysis, the calculus of finite differences, and information theory. As such, it appeals to a wide audience of mathematicians whose interests include the study of special functions, summability theory, analytic number theory, series and sequences, approximation theory, asymptotic expansions, or numerical methods. Richly illustrated, it features chapter summaries, and includes numerous examples and exercises. The content is mostly developed from scratch using only undergraduate mathematics, such as calculus and linear algebra.

Ibrahim M. Alabdulmohsin is a postdoctoral fellow at the Department of Computer Science at the King Abdullah University of Science and Technology in Saudi Arabia.