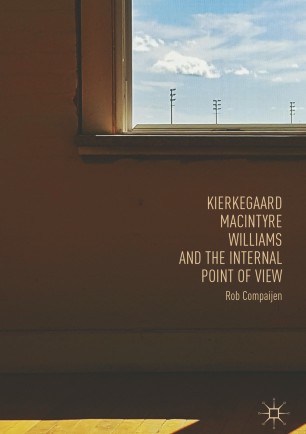 Kierkegaard, MacIntyre, Williams, and the Internal Point of View

This book takes the debate about the (ir)rationality of the transition to ethical life in Kierkegaard’s thought in a significantly new direction. Connecting the field of Kierkegaard studies with the meta-ethical debate about practical reasons, and engaging with Alasdair MacIntyre’s and Bernard Williams’ thought, it explores the rationality of the choices for ethical life and Christian existence. Defending a so-called ‘internalist’ understanding of practical reasons, Compaijen argues that previous attempts to defend Kierkegaard against MacIntyre’s charge of irrationality have failed. He provides a thorough analysis of such fundamental topics as becoming oneself, the ideal objectivity in ethics and religion, the importance of the imagination, the power and limits of philosophical argument, and the relation between grace and nature. This book will be of great interest to Kierkegaard scholars (both academics and graduate students) in philosophy and theology, and, more generally, to anyone fascinated by the rationality of the transition to ethical life and the choice to accept Christianity.

Rob Compaijen is a postdoctoral researcher at Radboud University Nijmegen, the Netherlands. He specializes in ethics, philosophy of religion, and 19th century thought, especially Kierkegaard and Nietzsche.

“Why should we care about ethics? Can reason alone persuade us to be moral? This problem haunts philosophy today just as it did at the outset. In Kierkegaard, MacIntyre, Williams, and the Internal Point of View, Rob Compaijen shows Kierkegaard to be a vital, illuminating interlocutor for philosophers grappling with these questions. Lucid, engaging, and deftly argued, this book’s conclusions  – provocative, original, and challenging – will be of deep and enduring interest to moral philosophers and Kierkegaard scholars alike.” (Patrick Stokes, senior lecturer in philosophy, Deakin University, Australia, author of The Naked Self, 2015 and Kierkegaard’s Mirrors, 2010)

“Compaijen’s lucid and engaging work connects Kierkegaard in interesting ways to recent philosophical debates about reasons for action and moral motivation. I found his work very thought-provoking, even – or especially – where I disagreed with him. Recommended for anyone interested in Kierkegaard or contemporary moral psychology and action theory.” (Anthony Rudd, Associate Professor of Philosophy, St. Olaf College, USA, author of Self, Value and Narrative: a Kierkegaardian Approach, 2012)

“Can we ascribe reasons to embrace ethical – or Christian – life to those living ‘outside’? Arguing for the importance of recognising our internal motivations in the picture with which these worldviews confront us, Rob Compaijen’s clearly written and thought-provoking study shows a mastery of two very different bodies of philosophical literature in advancing an important ongoing debate. The book will interest anyone open to considering Kierkegaard’s relevance to contemporary moral philosophy.” (John Lippitt, Professor of Ethics and Philosophy of Religion, University of Hertfordshire, UK, and Honorary Professor of Philosophy, Deakin University, Australia, author of Kierkegaard and the Problem of Self-Love, 2013, Routledge Guidebook to Kierkegaard’s Fear and Trembling,2003 and Humour and Irony in Kierkegaard’s Thought, 2000)

“Rob Compaijen displays a masterful command of the texts in play. His sensitivity to nuance and the charity with which he engages opposing points of view are exceptional. This is exactly the kind of book we need more of in Kierkegaard studies; it is honest, insightful, and engaging.” (Antony Aumann, Associate Professor of Philosophy, Northern Michigan College, USA)