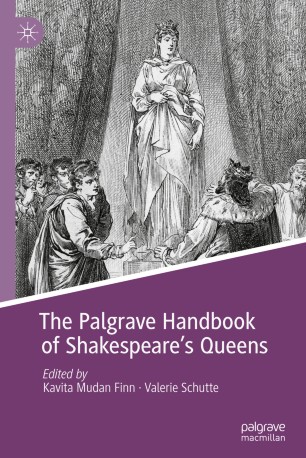 The Palgrave Handbook of Shakespeare's Queens

Of Shakespeare’s thirty-seven plays, fifteen include queens. This collection gives these characters their due as powerful early modern women and agents of change, bringing together new perspectives from scholars of literature, history, theater, and the fine arts. Essays span Shakespeare’s career and cover a range of famous and lesser-known queens, from the furious Margaret of Anjou in the Henry VI plays to the quietly powerful Hermione in The Winter’s Tale; from vengeful Tamora in Titus Andronicus to Lady Macbeth. Early chapters situate readers in the critical concerns underpinning any discussion of Shakespeare and queenship: the ambiguous figure of Elizabeth I, and the knotty issue of gender presentation. The focus then moves to analysis of issues such as motherhood, intertextuality, and contemporary political contexts; close readings of individual plays; and investigations of rhetoric and theatricality. Featuring twenty-five chapters with a rich variety of themes and methodologies, this handbook is an invaluable reference for students and scholars, and a unique addition to the fields of Shakespeare and queenship studies.

Kavita Mudan Finn has taught medieval and early modern literature at Georgetown, University of Maryland, George Washington University, and Simmons College, USA. She is the author of The Last Plantagenet Consorts (Palgrave 2012).
Valerie Schutte is the author of Mary I and the Art of Book Dedications: Royal Women, Power, and Persuasion (Palgrave 2015) and has edited several collections on early modern kings and queens.

“This is a timely and fascinating collection of essays, bringing together the work of full professors and independent scholars who have built careers in feminist historicist criticism, and their junior colleagues taking prior scholarship in new directions. The medieval notion of the monarch’s two bodies – the body natural and the body politic – comes in for particularly productive exploration, as does the performative act of ‘queening’ undertaken by boy actors on the early modern stage. Many essays challenge and build upon prior criticism to reframe and re-examine Shakespeare’s queens, often in light of their historical-political contexts. The essays are well-grouped; one can easily read standalone essays, groups of essays, or the entire book. It is well suited for both scholars and upper-division/graduate-level courses. Finally, given the focus on women in power in contemporary politics, this collection reminds us anew of the continued relevance of Shakespeare’s plays for our own era, our own issues, our own women who would be ‘queens,’ and rule.” (Regina Buccola, Chair of Humanities and Professor of Literature and Languages, Roosevelt University, USA)

“This collection provides fresh insights into the historical, political, and theatrical contexts of Shakespeare’s representations of royal queens and seeks to investigate new intersections among gender, performance, and power.  The complex nature of sovereignty and its response to societal pressures frequently necessitated a range of nuanced responses from queens.  Queenly influence could remain ambiguous at best but female collaboration could function, paradoxically, to move patriarchal figures into more considerate responses to female influence. The staging of maternity in terms of its impact upon the early modern political state and the manner in which language empowers women with authority also receive attention.  The collection offers an engaging close study of Shakespeare’s queens that highlights not only the evolving representations of the power and status of queenship but also the ways in which Shakespeare’s dramatic art matured.” (Debra Barrett-Graves, Professor Emerita, California State University, East Bay, USA)