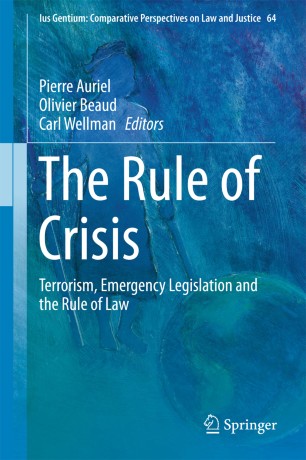 The Rule of Crisis

Terrorism, Emergency Legislation and the Rule of Law

This book analyzes emergency legislations formed in response to terrorism. In recognition that different countries, with different legal traditions, have different solutions, it adopts a comparative point of view. The countries profiled include America, France, Israel, Poland, Germany and United Kingdom.

The goal is not to offer judgment on one response or the other. Rather, the contributors offer a comprehensive and thoughtful examination of the entire concept. In the process, they draw attention to the inadaptability of traditional legal and philosophical categories in a new and changing political world.

The contributors first criticize the idea of these legislations. They then go on to develop different models to respond to these crises. They build a general analytical framework by answering such questions as: What is an emergency legislation? What kinds of emergencies justify laws of this nature? Why is contemporary terrorism such a specific emergency justifying new laws?

Using legal and philosophical reflections, this study looks at how we are changing society. Coverage also provides historical experiences of emergency legislations to further illustrate this point. In the end, readers will gain insight into the long-term consequences of these legislations and how they modify the very work of the rule of law.

Pierre Auriel has been a Ph.D candidate at the University Paris-II Panthéon-Assas since 2014. He is a member of the Michel Villey Institute for legal culture and philosophy of law and the European Law Centre. He won the Guy Carcassonne Prize for the best article on constitutional law (2015). His work mainly focuses on constitutional theory, European law, and the theory of fundamental rights.
Olivier Beaud was a professor of public law (State Professorship) at the University of Lille from 1990 to 1998. He was then elected to the University of Paris-II Panthéon-Assas (2008–). He has twice been a member of the University Institute of France, as a junior (1993–1998) and as a senior (2012–2017). He work currently focuses on constitutional law, constitutional theory, and legal theory, particularly comparisons between the French and German legal doctrines.
Carl Wellman is an Emeritus Hortense and Tobias Lewin Distinguished Professor in the humanities at Washington University in Saint Louis. He was born in 1926, graduated from the University of Arizona in 1949, and received his doctorate from the Harvard University in 1954. He taught at the Lawrence College from 1953 until 1968 and then at Washington University from 1968 until 1999. His major publications are Welfare Rights, 1982; A Theory of Rights, Persons Under Laws, Institutions, and Morals, 1985; Real Rights, 1995; An Approach to Rights, 1997; The Proliferation of Rights, Moral Progress or Empty Rhetoric, 1999; Medical Law and Moral Rights, 2009; The Moral Dimensions of Human Rights, 2011, and Terrorism and Counterterrorism – A Moral Assessment, 2013; Constitutional Rights: What They Are and What They Ought to Be, 2016.