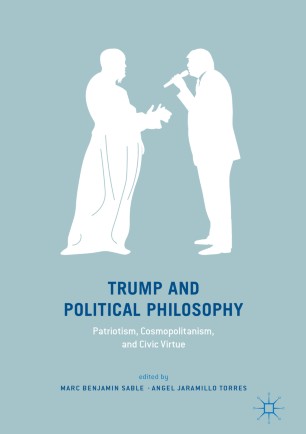 This book seeks to address the relation of political philosophy and Donald Trump as a political phenomenon through the notions of patriotism, cosmopolitanism, and civic virtue. Political philosophers have been prescient in explaining trends that may explain our political misgivings. Madison warned during the debates on the Constitution that democracies are vulnerable to factions based on passion for personalities and beliefs; various continental thinkers have addressed the problem of nihilism—the modern loss of faith in objective standards of truth and morality—that in Max Weber’s analysis pointed to the importance of charisma, in Carl Schmitt’s to the idea that politics is essentially rooted in the definition of friends and enemies, and in early Heidegger resulted in the emphasis on the enduring significance of local, rather than cosmopolitan values. The former concerns—regarding demagoguery, charisma and nihilism—will enable an evaluation of Trump as a political character, while the latter concerns—regarding the status of universal versus local values—will enable us to evaluate the content of “Trumpism.”  Taken together, these essays seek to advance the public conversation about the relationship between the rise of Trump and the ideological forces that seek to justify that rise.

​Marc Benjamin Sable is an Associate Professor of Political Science at Bethany College in West Virginia, USA.
Angel Jaramillo Torres is currently a Postdoctoral Fellow at the National Autonomous University of Mexico (UNAM).

“These essays address important subjects, ask many of the right questions, and treat writers and thinkers worthy of serious, sustained attention. … For this reason alone—but also for many others—these two volumes are welcome.” (Michael Anton, The Claremont Review of Books, Vol. 18 (04), Fall, 2018)
Buy options