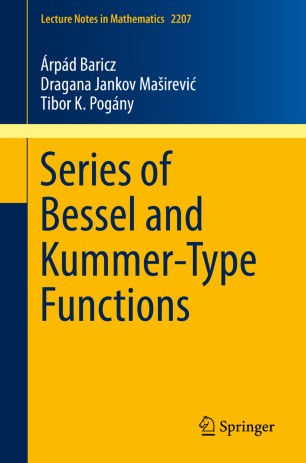 Series of Bessel and Kummer-Type Functions

This book is devoted to the study of certain integral representations for Neumann, Kapteyn, Schlömilch, Dini and Fourier series of Bessel and other special functions, such as Struve and von Lommel functions. The aim is also to find the coefficients of the Neumann and Kapteyn series, as well as closed-form expressions and summation formulas for the series of Bessel functions considered. Some integral representations are deduced using techniques from the theory of differential equations.

The text is aimed at a mathematical audience, including graduate students and those in the scientific community who are interested in a new perspective on Fourier–Bessel series, and their manifold and polyvalent applications, mainly in general classical analysis, applied mathematics and mathematical physics.

“The authors of this book give an extensive study related to the series of Bessel- and Kummer-type functions. … The book also represents a solid source for master’s and PH.D. students that are starting their research careers in the field of mathematical analysis, applied mathematics and mathematical physics, to name but a few.” (Trufce Sandev, Mathematical Reviews, February, 2019)
Buy options