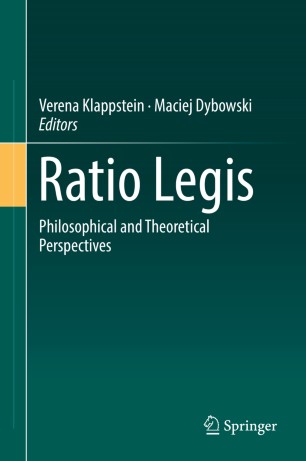 The book is dedicated to the theoretical problems concerning ratio legis. In the contexts of legal interpretation and legal reasoning, the two most important intellectual tools employed by lawyers, ratio legis would seem to offer an extremely powerful argument. Declaring the ratio legis of a statute can lead to a u-turn argumentation throughout the lifespan of the statute itself – in parliament, or in practice during court sessions, when it is tested against the constitution.

Though the ratio legis argument is widely used, much about it warrants further investigation. On the general philosophical map there are many overlapping areas that concern different approaches to human rationality and to the problems of practical reasoning. Particular problems with ratio legis arise in connection with different perspectives on legal philosophy and theory, especially in terms of the methods that lawyers use for legal interpretation and argumentation. These problems can be further subdivided into particular aspects of activities undertaken by lawyers and officials who use the ratio legis in their work, and the underlying theories. In short, this book examines what ratio legis is, what it could be, and its practical implications.

Dr. iur. Verena Klappstein M.A., LL.M. is Habilitandin at University of Passau (Faculty of law, Professorship for German and European Private Law, Civil Procedural Law and Legal Theory of Prof. Dr. Thomas Riehm). The working title of her Habilitation based on Kantian Moral Philosophy is: “Vertragsfreiheit durch Kontrahierungszwang und -verbot” (Freedom of Contract via obligation to and prohibition to contract). Her main research areas are Private, Company and Business Law, Legal Philosophy and Philosophy of Science.
Dr Maciej Dybowski is a lawyer and a philosopher, working as an assistant professor at the Chair of Theory and Philosophy of Law, Faculty of Law and Administration, Adam Mickiewicz University in Poznań, Poland. His main fields of research include philosophy of law, neopragmatism, law and language, philosophy of human rights.